I finally got to meet a new friend in preservation a couple of weeks ago. We had a wonderful breakfast at Enzo's on Race Street in Over-the-Rhine and chatted about our love of the history and buildings of this wonderful Cincinnati neighborhood. We took a stroll up Race Street, seeing all the amazing work being done.

Our goal was 1420 Race, a wonderful remodeled condo listed with Coldwell Banker West Shell. It really is a single family residence with three bedrooms and three and half baths. She showed it to me because I wanted to see a true example of what was being done in the neighborhood with blending historic features with the needs of modern living.


So of course, after seeing this building, I promised the builder I would "dig" up some historic information on it. We continued on our way up Race Street and this caught our eyes: 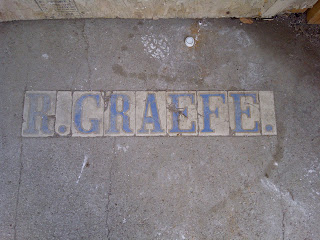 Well, who the heck is R. Graefe and why did he put his name in the sidewalk right in front of his door? So I looked up to check out this building and saw this: 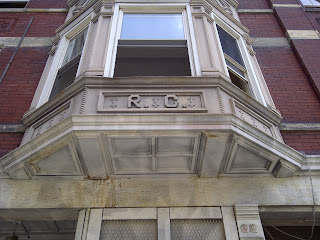 Is R.G the same as R. Graefe? If so, what exactly did he do at 1428 Race Street with the beautiful bay windows?

I think the hand of providence sent me to these two properties that day, because, lo and behold, they were owned by the same family!

Fred Beis family was a shoemaker. He lived at 1420 Race starting in 1888 along with Robert Graefe and Robert's wife, Wilhelmina Beis Rolle Graefe. Well, hello, Mr. R. Graefe! He was a leather worker. He is listed in the William's City Directory under the category of Boot & Shoe Manufactures.

What was even more convienent was that Mr. Graefe had his business right next door at 506 Race (now 1418) which is shown as being a boot factory in this 1887 map.

Alma Graefe married William Bremer in 1914. After her father's death, she continued to own both 1420 and 1428 Race until 1949 and 1960, respectively. Interestingly, William Bremer continued run the family business, as the manager of "Robert Graefe, Leather" as of the 1936-37 William's City Directory.

From my little walk up Race Street, I came to know the story of two buildings, and one family who remained dedicated to Over-the-Rhine for over 70 years.
Posted by cincyhistoryluvr at 10:14 AM 1 comment:
Email ThisBlogThis!Share to TwitterShare to FacebookShare to Pinterest
Newer Posts Older Posts Home
Subscribe to: Posts (Atom)