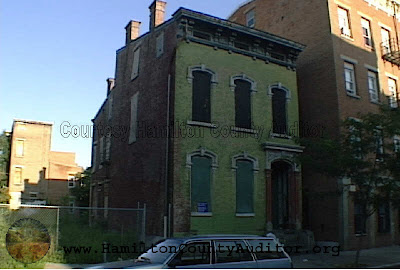 I started with the Sanborn Insurance Maps and this told me the address was 509 Race Street prior to the city-wide renumbering that took place in 1895-96. This gave me the information I needed to start searching the city directories for a name.
"1875 - MUELLER C. H., Druggist and Apothecary,s. w. c. Race and 15th; Residence, 509 Race"
Charles H. Mueller actually started as a "Druggist and Apothecary" as earlier as 1868 at the southwest corner of Race and 15th. If we take a look at a map:
... we see that at that same location is St. Paul's German Evangelical Church. In the following map from 1891, it is clearly marked that this location says "drugs".
What the heck is a drugstore doing at the street level of a church? Apparently, this retail space was built in order to support the church with consistent income to help pay off the construction costs. Charles Mueller ran his pharmacy (he is listed as a pharmacist starting in 1895) at this location starting in 1868, with his son, Oscar, joining him in 1900.
It remained their business and 509 Race was their home from approximately 1875 until Charles' death in 1919. Afterward, it was occupied by various families, mainly of Italian descent. The home is being renovated as part of the Park Haus project through 3CDC.
The church has also had some recent stabilization work completed and 3CDC is looking into options for its reuse.
Just another great example of how Over-the-Rhine was a neighborhood where the German immigrants lived, worked and played!
Posted by cincyhistoryluvr at 8:54 PM
Email ThisBlogThis!Share to TwitterShare to FacebookShare to Pinterest