One of my favorite things to do is look at homes that are for sale via the real estate websites. So I was snooping around the Over-the-Rhine area and stumbled upon a house at 1223 Jackson Street.

It caught my eye because it is a small single family in between much taller buildings. It also has a low list price because it is currently a shell in need of a total rehab.


It appears the home was built in approximately 1864 for the Leopoldt family. The patriarch was Wilhelm Leopoldt and I found his obituary which was original printed in German in Der Deutsche Pioniere, a monthly magazine issued by the Deutsche Pioniereverein (Union of German Pioneers) founded in Cincinnati.

(Obituary) Member of the Pionier Verein . He was well-known to everyone for, as a musician, he participated in the theater, German balls, and dances. He was born on 29 Dec 1822 in Muelverstedt, Prussia, and emigrated with his parents in Jun 1836 to America. The family departed via Bremen and arrived in New York during August (1836). He accompanied his family to Chillicothe and became employed as a steward aboard a canal boat between Chillicothe and Portsmouth.  On the same boat our well-known citizen F.X. BRAUNSTEIN was a cabin boy. After a year’s time, Leopoldt left this job and settled in Cincinnati in November 1837. He worked first as a food vendor at the National Theater and thereafter, ran a bar mainly frequented by musicians. Leopoldt also worked as a relief musician (contrabass). Soon, he was in constant demand as a bass player. He then moved his saloon to Main Street near Thirteenth Street; it was called the North Star House.

About this time Leopoldt became an enthusiastic founder of the German theater in Cincinnati. The history of this theater is set forth on page 27 of this volume of the Pionier. He then took up the study of the trombone. (There follows a humorous tale of his performance on this instrument.) He became agent for the Jefferson Hall, then the most prominent concert hall in the city.

As with all the older Germans of the city, Leopoldt was an energetic participant in politics. He was a member of the Democratic Party and was elected several times to be the tax assessor in the Tenth Ward. He died on 3 Jan 1875 after a lengthy illness.

Wilhelm was married to Magdalena. According to the 1900 Census, they had 9 children but only 3 were still alive at that time. Their children were:


Their sons also followed in the footsteps of their father as musicians. When Herman died in 1890 in Cincinnati, the following was printed in New York Dramatic Mirror:

Herman Leopoldt, for ten years orchestra leader at the People's Theatre, died suddenly.  Deceased was about forty years old, and leaves a widow and one child. The remains were interred 16 in Spring Grove Cemetery, and the entire force of the employes at Heuck's and the People's attended the funeral.

After Wilhelm's death in 1875, Magdalena continued to live in the home with her children until they moved away. She also rented rooms to working families. The city directories shows she last lived at 1223 Jackson Street in 1905. Magdalena moved to other Cincinnati homes with her son, Edward and by the 1910 Census, she is living in New York City with her daughter, Louisa and her family. Census records also show that her sons, Edward and William are also living in New York City after 1910. Magdalena died May 22, 1916 at the age of 94. Her body was returned to Cincinnati to be buried with her husband at the Walnut Hills Cemetery.

After this long period of ownership by one family, the home was occupied by renters in the 1910, 1920 and 1930 Censuses.
By looking at these census records, you can see how the residents of Over-the-Rhine changed from being  German immigrants to Appalachian immigrants in the 1930's.

I wonder how much beautiful music those long standing walls have heard over the years. It is time for this home to be returned to a single family, maybe to another family of musicians. I hope someone purchases and restores this home to honor the Leopoldt family and all the others who lived here.
Posted by cincyhistoryluvr at 8:09 AM No comments:
Email ThisBlogThis!Share to TwitterShare to FacebookShare to Pinterest

The Three Sisters of Vine Street

I am fulfilling another request from my Facebook page. Brad suggested the houses at 1919, 1921 and 1923 Vine Street. These are three "sister" houses because they were all built around the same time and are similar in appearance.

Victorian Antiquities and Design highlighted 1923 Vine last fall and luckily it has found a new owner.

Now for some history! These home were all built around 1905. Originally, the land these homes sit on were part of A. Schwill & Co. Malt House.
At one time, Albert Schwill & Company was the largest producer of malt for brewing beer in the United States. But even early, at the location that ran from West McMicken (once called Hamilton Road) to Vine Street was the Lafayette Brewery, owned by Alexis Darusmont. After his death, his wife continued to run the brewery until 1878. It was sold to Albert Schwill in 1882. Albert Schwill & Company also had offices and plants in Chicago.
By 1904, the malt house was owned by Herman Goepper. About 1909, the Aman and Sandman Box Company, specializing in cigar boxes took over the McMicken Street location.
From researching the census records, it appears that these were built to be used as rental housing.
In 1910, 1920 and 1930, all three homes were occupied by one or two small families in each. In 1930, Jacob Kraeusser owned 1919 Vine Street. His step-son, George J. Eggebreckt lived with him and his shown as the owner of 1923 Vine Street prior to 1948. I am guessing that Kraeusser and Eggebreckt owned all three homes and rented the ones they did not live in. After 1946, the homes were each given their own parcel of land and sold separately.

Know of another of "sister" homes? Just let me know and I will do some more digging!
Posted by cincyhistoryluvr at 10:36 PM 1 comment:
Email ThisBlogThis!Share to TwitterShare to FacebookShare to Pinterest 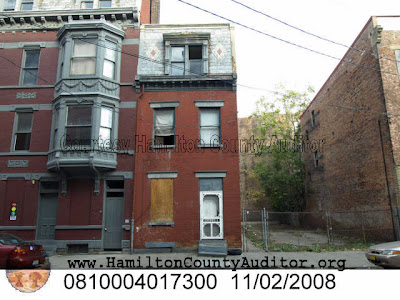 From single family home to multi-tenant rental property - so goes the story of many of the homes of Over-the-Rhine.
Posted by cincyhistoryluvr at 8:44 PM 4 comments:
Email ThisBlogThis!Share to TwitterShare to FacebookShare to Pinterest
Newer Posts Older Posts Home
Subscribe to: Posts (Atom)