Before it was a Verein Hall

I received a wonderful gift from my kids at Christmas, a book called "Over-the-Rhine Tour Guide" by Don Heinrich Tolzmann. I can't wait until I get to read the whole book, but while paging through, a photo of 1708 Logan Street caught my eye.
Mr. Tolzmann explains this home and the attached structure on the left was called Banater Hall. Banat was a region in southeastern Europe and this was a meeting place up until the 1950's for immigrants from those regions.

But what was it before it became Banater Hall? It had to be someone's home with those beautiful arched windows and the shutters still there. A friend emailed me to see if I knew anything else on the home and I just had to find out.

In 1877, August Harlfinger, born in German in 1813, lived here with his wife Anna Susanna (Susan) and daughter Elizabeth. August was a sausage manufacturer with his shop just next door to his home. By 1879, Elizabeth married David Dater, who joined the family business. August died in 1881. Unfortunately, David died in 1884, leaving his wife Elizabeth with two young daughters.

However, in 1888, Elizabeth married J. George Zehler, a butcher. By 1890 he is co-owner of a business just across the street from his home, Charles Reif & Company, a slaughter house and sausage company.
1890 City Directory - REIF CHAS. & CO., (Chas. R. & Geo. Zehler)
By 1895, the company has become The George Zehler Provision Company, with George Zehler as President. The family, George, Elizabeth, her children from her first marriage and their children, along with her mother, Susan, at 42 Logan Street, soon to be renumbered as 1708 Logan. Susan passed away in 1896, leaving the home to her daughter and her family.

I found this wonderful obituary of George after his death in 1918:


CINCINNATI PACKER PASSES AWAY.
George Zehler, Sr., president of the Zehler Provision Company, Cincinnati, Ohio, died on February 13 at his home in Cincinnati at the age of 57 years. Mr. Zehler had been in illhealth for Borne time, and his death was due to a complication of ailments.

He was one of the best-known of the famous Cincinnati coterie of pork packers, and was a leader in everything that was started to advance the interests of the trade, both in his home city and in the country at large. He was a charter member of the American Meat Packers' Association, and served as its treasurer at one time. Nobody was more enthusiastic as a "booster" for the association that was Mr. Zehler, and he was always ready to give of his time and means to forward the cause.

Mr. Zehler was prominent in Cincinnati business circles outside the meat trade, and a leader in social and fraternal organizations. He was a director in the German Mutual Insurance Company and vice-president of the Hotel Savoy Company. He will be particularly missed by members of the Savoy Birthday Club, of which he was the commodore on river excursions. He is the first member that unique organization has lost by death since it was organized four years ago.

Mr. Zehler leaves a widow and seven children, a son, George Zehler, Jr., and six daughters, Mrs. George Guckenberger, Mrs. Jacob Schlachter and Misses Leonore, Edna, Thelma and Susan Zehler. George Zehler, Jr., has been at the head of his father's business for some time.

The business was left at the hands of the family with George Zehler, Jr. as president and treasurer, his mother, Elizabeth, as vice president and his sister, Edith as secretary.  The following is from "Memoirs of the Miami valley"


George A. Zehler is one of the progressive business men of the younger generation at Cincinnati, and has been connected with his present firm ever since leaving the University of Cincinnati. He is thoroughly familiar with all the details of the business, and conducts its affairs in a manner at once capable and expeditious. The large modern plant, occupying 50,000 square feet of floor space, gives employment to a small army of workers, and the pork and beef products which are packed here find a ready market all over the United States. Mr. Zehler is aided well in his work by his sister, who has taken over the secretarial duties and is handling them with neatness and dispatch. The fraternal connection of Mr. Zehler is with the Masons, in which he belongs to Avon Lodge and has reached the Scottish Rite degree; and he likewise holds membership in Syrian Temple of the Mystic Shrine. 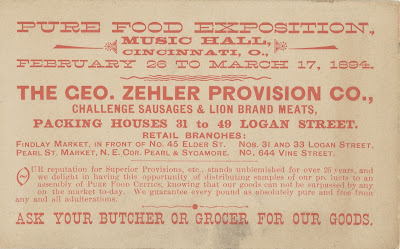 While George Jr. moved away from 1708 Logan Street, the home remained with his mother Elizabeth until her death in 1926 and then to his sisters until they sold it to Vereinigte Banater Verein (translates to United Association of Banat) in 1930-31.

In 1933-34, Banater Hall was used for meetings various German groups, including the Deutscher Frauen Kranken Unterstuetzungs Verein (German Women Health Support Association) and the Deutscher Manner Kranken Unterstuetzungs Verein (German Men Health Support Association). Banater Hall was owned by what eventually became the Donauschwaben Society and the hall at 1708 Logan Street was sold in 1967 to a private owner. The Donauschwaben Society has made their home in Colerain Township since 1972.
Posted by cincyhistoryluvr at 1:29 PM
Email ThisBlogThis!Share to TwitterShare to FacebookShare to Pinterest