I came across this week's property last December, when I was doing some research for the North of Liberty Facebook page owner. I saw this picture on the page:
The logo above the door caught my eye and I wanted to know more. I looked at the old maps and saw in 1891 it was George Meyer, Undertaker. But I wanted to know just how long Mr. Meyer had been at that location, what had been 664-666 Vine Street, today known as 1804 Vine, near the point made by Vine Street and East McMicken.

I got back as far as 1866, when Joseph Schreiber owned a livery and stable business here. In 1870, he was joined by William Gerstle and Henry Noewer, now listed as undertakers. The business transferred hands a few times until 1880, when George Meyer took over the business.
The following is from the 1887 Williams City Directory:

As you can imagine, the livery business eventually went out of style with the invention of the automobile, but the Meyer family hung onto the undertaking business. After George Meyer passed away, his son George and grandson Charles took over the business. It remained at this location until sometime after WWII when the business was moved to Montgomery Road in Pleasant Ridge and then later to Section Avenue.
By 1950, the Vine Street location was purchased by the Radel family, in the funeral and undertaking business since 1878. By 1956, it was sold and eventually became the House of God Chapel until 1990. Ownership has changed hands quite a few times since then and was last sold in 2011 for just $10,000.

As for the logo over the door on the rear entrance on McMicken Street? 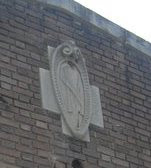 It appears to have a M and a S - Meyer Stables. Still there after all these years.
Posted by cincyhistoryluvr at 3:37 PM
Email ThisBlogThis!Share to TwitterShare to FacebookShare to Pinterest