The Mystery of Casse' Frocks

On one of my strolls through Over-the-Rhine, I came across this lovely decorative stained glass for Casse' Frocks on Main Street where the New Stage Collective had been.
Even the entryway is amazing with the domed roof and the stained glass address:
So I just had to know more! I started with the maps which didn't provide much information other than the address prior to 1896 - 474-476 Main Street.
Searching the Williams' City Directories, I found out that from 1875 until 1897, August Schmidt & Company ran a dry goods store at this location. Then from 1898 to 1900, Veronica Kohus and Bernard Moeller had a shop that sold carpets, wall paper, window shades, oil cloths and lace curtains.
Another dry good store, Purcell & Klimper, occupied 1138 Main Street from 1902 until 1919. Finally, something to do with clothing shows up in 1920 - Alvin Cloak and Suit Company but only sticks around until 1924.
The Levine Furniture Company moved into 1138 Main Street in 1925 but by 1927, they had changed their address to 1140 Main Street (more on Levine in another post to come). A shoe store lasted just 2 years until, finally, in the 1929-1930 city directory, Casse' Frocks shows up! But curiously, even after all the detail added to the front of the building, by 1931-1932, 1138 Main Street is listed as vacant. It was possibly a victim of the Great Depression. I scoured the web for any more information on the company, but could only find that they also had stores in Zanesville, Coshocton, Lima, and Covington, KY.
From 1932 until 1942 Nathan Fogel ran a women's clothing store at 1138 Main, also called the Empress Garment Company. 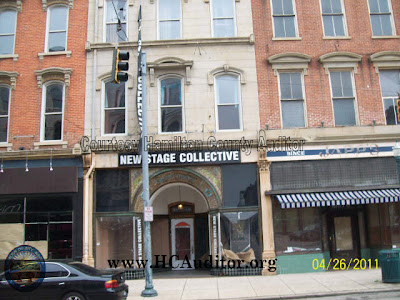 More recently, Jekyll & Hyde's, Rythm & Blues Cafe and the New Stage Collective has occupied this space. If anyone knows what the plans are for this building, please share!
Posted by cincyhistoryluvr at 10:55 PM
Email ThisBlogThis!Share to TwitterShare to FacebookShare to Pinterest