A Beauty in Mount Auburn

This week's subject comes from a request from Facebook follower Kevin, asking about the building that houses the Educational Theatre Association at 2343 Auburn Avenue. This one really caught my interest because I was once a Thespian in my high school days. So in my best Nancy Drew character, I went off to investigate... 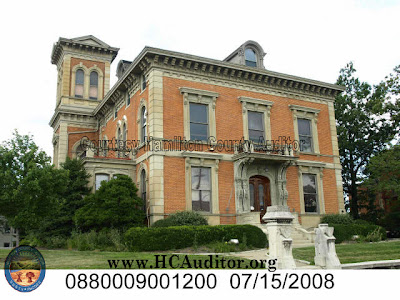 Turns out investigating wasn't too hard, since only two families ever lived in the home. It was built in 1871 by Isaac Graveson, who was a well-known contractor and in the business of cut stone:

Graveson, Isaac
(Haxey, Lincolnshire, England, 1826-1903)
Graveson, who perhaps considered himself an architect, and his business supplied cut and sawed stone for many of the major buildings in Cincinnati and vicinity from ca. 1850 on, including the old Hughes High School (J. Earnshaw, 1851), the Pike Opera House on Fourth St. (1854-1858), the Covington Odd Fellows’ Hall (NEC Madison and Fifth streets; 1856), the Mitchell & Rammelsberg Block on Fourth St. (now part of McAlpin’s; Walter & Wilson, 1856); the Henry Probasco House, Clifton (W. Tinsley, 1869); probably the Marcus Fechheimer House on Garfield Place (now the Butterfield Senior Center; Anderson & Hannaford, ca. 1863); the Handy-Shillito House, Mt. Auburn (J.W. McLaughlin, 1864); the rebuilt Pike Opera House (I. Rogers, 1867); the A.H. Hinkle House (later Planned Parenthood) formerly on Mt. Auburn (A.C. Nash, 1868); and the Esplanade and base for the Tyler Davidson Fountain, Fountain Square (originally W. Tinsley, 1870); as well as supplying stone and/or building structures in Dayton, Oh., Cairo, Ill., St. Paul, Minn., St. Louis, Indianapolis, Louisville, Memphis, and Canada.
All these and many others, representing virtually every significant architect working in Cincinnati in the Civil War period, plus “the New Chamber of Commerce in Chicago” (1872), are listed on a year-by-year basis in his 1876 biography. Presumably he built his own magnificent Italianate mansion at Auburn Avenue in Mt. Auburn as a showplace for his skills. Many of Graveson’s business papers survive at the Cincinnati Historical Society. - Source

It is not know why, but Graveson sold his beautiful home just four years later to Mordecai  Morris White. What is very curious is that it seems these men exchanged homes:

1875
Graveson Isaac Cincinnati Stone Works, 30 and 38 Hannibal; Residence, 420 W. 6th
White M. M. cashier 4th Nat. Bank, h. 201 Auburn, Mt. Auburn
White M. M, (W., Bro. 4 Co.) res. Mt, Auburn
Mordecai Morris White, who preferred to be called Morris, was born in 1830 in North Carolina, son of Quakers John T. White and Susan Morris. He was named after his grandfather, Mordecai White, who was a wealthy plantation farmer. In the same year of his birth, Morris' family moved to Washington County, Indiana. Just three years later, his mother died and by 1840, Morris and his younger brother, Francis Toms White, were sent back to North Carolina to live with their grandfather. In 1945, the White brothers returned to Indiana and the next year, their grandfather passed away, leaving his large estate in North Carolina to the brothers and their step-grandmother. They also inherited 2,400 acres in Indiana.

Morris was educated at Earlham College in Richmond, Indiana and took a commerical course in Cincinnati after graduation. In 1851, he moved to Philadelphia, trying the mercantile business. During a trip to Cincinnati, he met A.H. Wells, a wholesale grocer looking for a partner with capital to join his business, which came to fruition in 1853. Mr. White is fondly remembered for what occurred in 1855, when he returned to North Carolina and made arrangements for the slaves of his grandfather's plantation to be freed and moved to Raysville, Indiana where he provided them homes, furnishings and jobs.

In 1859, A.H. Wells retired from the grocery business and the White brothers became the sole owners of a successful mercantile business. The White brothers became interested banking, and joined the firm of Hewson, White & Co. This firm was absorbed into the Fourth National Bank where Morris became cashier and then president by 1875. He remained as president until 1908, when he retired and became chairman of the board. In 1892, he was elected to the American Bankers' Association, where he served as vice-president and president.

Morris married Hannah Amelia Coffin in 1858, whose father Elijah Coffin, was a well known Indiana banker. They had four daughters: Frances Amelia, Alice Mary, Susan Morris and Helen Lawson. Morris White died in 1913 at his home. His estate was believed to be valued at between $15,000,000 and $20,000,000 at the time. The following memorial was written in his honor:

Mr. White was a manly man in every sense, "standing four square to every wind that blew," and ever commanding the un-reserved confidence of all who knew him. A man of broad views of men and things, he was liberal and spontaneous in his support of all things which to him seemed to be for the general good of mankind. He gave liberally of his means to many institutions, including the Art Museum in Eden Park, the Young Men's Christian Association, the Young Women's Christian Association, the School of Technology, the Children's Home, Union Bethel, and to Earlham. College, which was to him the dearest of all these institutions, he gave one hundred thousand dollars as an endowment fund. Of that college he served for many years on the executive committee and was president of the board of finance of the Indiana Yearly Meeting of Friends. Politically, Mr. White was a life-long supporter of the Republican party, though never a seeker after honors or preferment of any kind for himself.
… A man of simple habits and domestic in his tastes, Mr. White found his greatest enjoyment in his home, where the spirit of genuine old-time hospitality was ever in evidence. His career was dignified and manly and his success was measured by its usefulness, for during his long and active life his influence made for the progress and upbuilding of the community which had been honored by his residence. Mr. White was a great friend of young men and started many a young man off right in life. There was in him a weight of character, a native sagacity, a far-seeing judgment and a fidelity of purpose that commanded the respect of all, and because of his sterling traits of character his memory is to-day honored by all knew him.

Hannah White continued to live in the home until her death in 1934, at the age of 96. The estate, along with all the furnishings, were sold to the American Red Cross in 1935 for its Cincinnati headquarters. The south wing which contained the drawing room, conservatory and dining room were designated as the "Hannah A. White Memorial" and used for special meetings.

By 1950, the Red Cross had moved their headquarters and the home was sold to Family Service of Cincinnati and Hamilton County. When it was sold, it was to be used for office space, but on the map below from 1950, it clearly states the home was a dormitory, either for the Red Cross or Family Service.
The home was sold again in 1984 to the Mt. Auburn Partnership and was used as office space. In 1998, then owner, United Medical Resources, sold the home to the Educational Theatre Association for $800,000.  The home then contained 14,000 square feet of space and storage house of 2,000 square feet. ETA has continued to maintain this beautiful home as their offices.

Posted by cincyhistoryluvr at 1:53 PM
Email ThisBlogThis!Share to TwitterShare to FacebookShare to Pinterest