Another home on the National Register of Historic Places, this one is located on Eastern Avenue in the Columbia Tusculum neighborhood of Cincinnati. It was originally built in 1855 for Dr. Wesley Elstun but it was purchased in 1865 by Dr. Henry Archer Langdon. Its architectural style is called Steamboat Gothic and is believed to be one of the last remaining ones of this style in Cincinnati.

Dr. Langdon was born May 28, 1839, in Linwood, Ohio. He was the son of James Davenport Langdon and Sarah Phelps Langdon. He attended the Miami Medical College in Cincinnati and in 1862, he joined the Union Army to serve during the Civil War. That August, he was appointed as Assistant Surgeon to the 79th Regiment, Ohio Volunteer Infantry. By February 1863, he was a Full Surgeon and served until the end of the war.


As you can see, only one of their five children survived until adulthood. Emeline passed away in 1874, just two weeks after giving birth to twins. In December 1875, Dr. Langdon married Sydnie Edward, and she became William's mother. Just five months after their marriage, Dr. Henry A. Langdon passed away from a brain hemorrhage on May 13, 1876. (Source)

THE LATE DR. H. A. LANGDON.
RESOLUTIONS PASSED BY THE MIAMI MEDICAL SOCIETY.
Whereas, Our friend and professional brother, Henry Langdon, has been removed from our midst by the hand death ; therefore be it
Resolved, That the Miami Medical Society has lost in o deceased friend one of its most useful and distinguished members, and the medical profession of Cincinnati one of its brightest ornaments.
Resolved, That in his sincere sympathy with suffering, in thorough and scientific medical knowledge, and the calm, strong spirit which at all times impelled him fearlessly to do his da Dr. Langdon possessed in a most uncommon degree those high qualities which makes a physician invaluable to a community
Resolved, That to the community which will vainly seek replace him, to the friends and relatives who have lost him. hereby respectfully tender our heartfelt sympathy, and min join our regrets with theirs.
W. W. Highlands. M. D.. Pres
George Conner, M. D., Secit

Sydnie and William moved to live with her family. The home remained in the Langdon family and became a rental property.

Click on the following to enlarge
When William Langdon became an adult, he also studied medicine at Miami College and joined the Marine Corps. He worked as a doctor in Mount Washington. William's son, Henry H. Langdon, also became a doctor, served his country in World War I in France and at the time of his death in 1937 at the age of 40, was Chief of Staff at Cincinnati General Hospital.

When William passed away in 1955, the home was sold to private owners until 1966 when it was purchased by the Miami Purchase Association, predecessor to the Cincinnati Preservation Association. In 1969, it was added to the National Register of Historic Places and plans were made to remove the doctor's office building to the Heritage Village at Sharon Woods Park, where it still stands today.

The Miami Purchase Association sold the home in 1976 to a couple who made plans to restore it to its former glory. Since then, other owners have maintained or improved the home to the beautiful place it is today. 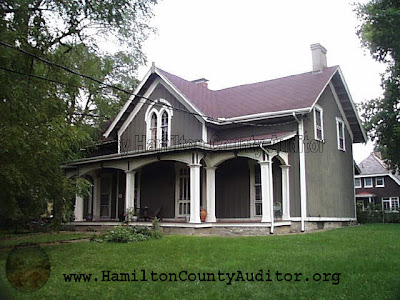 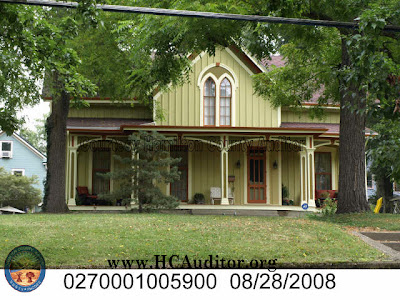 Posted by cincyhistoryluvr at 8:02 PM
Email ThisBlogThis!Share to TwitterShare to FacebookShare to Pinterest