Another home built by Samuel Hannaford and Sons and one the National Register as a result, a reader asked about this home recently.

This home was built in 1887, although according to a newspaper article in 1883, the original 16 acres of land was purchased in that year for $36,000. The purchaser was Adam Edward Burkhardt, an immigrant from Germany, who owned a successful fur business.

The following biography was written in 1875 in the book, Ohio, the Future Great State: Her Manufacturers, and a History of Her Commercial Cities, Cincinnati and Cleveland:

A Man who, from an humble position and by his own efforts, has risen to affluence and social position, and through all the events of a checkered life has preserved his integrity unimpeached, well deserves the pen of the historian, and to be held up as a model to posterity.

A. K. BURKHARDT was born in Herschberg, near Zweibriicken, Rhenish provinces, Bavaria, April 26. 1845, and is, therefore, in his thirty-first year. When ten years old, his father died, and he, with his mother and sister, embarked for America the same year, settling with them in Cincinnati immediately after their arrival. In three and a half years after he lost his mother, so, at the age of thirteen, he, with his sister, were left orphans. Mr. Burkhardt attended school in Germany when only six years old, and continued his education in the public-schools of Cincinnati till his mother's death, which occurred in 1859; after which, he entered the employ of Mitchell & Rammelsberg as errand boy at a salary of one dollar per week. This position he occupied only three months, and left to better himself pecuniarily, having received an offer of one dollar and fifty cents per week from Jacob Theis, retail hatter and furrier; and here was has first step that has resulted in his present colossal business. Commencing at the lowest possible position, he gradually promoted himself by his strict attention to the duties imposed upon him, till after a few years we find him occupying the loftiest position within the gift of his employer, and a fitting reward for his zealous fidelity to his employer's interests. This position he continued until January, 1867, at which time himself and brother-in-law, F. B. Burkhardt, bought out the business from Mr. Theis. The subject of this sketch assumed sole management.

What success has attended his exertions and shrewd business management is apodictical to us all, for there are few among our readers who do not know Mr. Burkhardt personally or by reputation as taking the lead in the art as hatter and furrier. His business so soon increased that the demand for more capacious accommodations resulted in his leasing the new and spacious salesrooms at 113 West Fourth Street (Mitchell's Block), where he caters to the wants of his customers, though he still keeps the old stand on Main Street. A. E. Burkhardt & Co. are also large exporters of raw skins, their principal shipping-points being Leipzic and London. They receive consignments from every State in the Union, British and South Americas, and have over three thousand correspondents.

On March 1, 1871, Mr. B. was joined in wedlock to Miss Emma Amanda, the only daughter of our distinguished fellow-citizen, Andrew Erkenbrecher, Esq., and we need not add that the result has been a happy one. He has been successful in all of his business pursuits, from a rare combination of industry and judgment, and has gained the confidence and respect of the whole community by at all times exhibiting a rectitude of character which never wavered from a proper direction. He can enjoy the fruit of the seed he has sown, whilst his nature is susceptible of enjoyment, and the stamina of life have not weakened and decayed. He has all the elements of happiness within his reach, and they are of his own creation.

In all of Avondale there is no place more beautiful than Edgewood, the home of Mrs. A.E. Burkhardt, and in all the annals of Cincinnati’s social history no reception has excelled in sumptuous appointment the one she gave yesterday to meet her niece, Miss Clara Erkenbrecher. The house of stone is built on the edge of one of the most picturesque woods in the Ohio valley and has a far-away view from every outlook.
The interior is of royal magnificence, with its rare painting and statuary pieces from the A. T. Stewart collection, bric-a-brac picked up at intervals in Europe, and an abundant wealth of the floral world filled the house with delicious perfume and added to the general gorgeous effect.
The drawing room, furnished in white and gold, was lavishly decorated with bowls of pink and white roses.
The hall was gorgeous in red: half way upstairs beneath a superb stained-glass window was a floral window seat in yellow tulips. The library across from the drawing room was a picture in yellow. The high shelves of the mantel were heaped with the golden flowers of spring and across the top of the long book-case were massed the same lovely flowers in riotous profusion.
The rooms above the stairs were greatly admired, especially the Moorish room, and Mr. Albert Erkenbrecher’s bachelor quarters on the third floor. A full orchestra was stationed near the stairs, and discoursed the brightest and latest of operatic and dance music…
But the prettiest place in all the house was the dining room, a dream in green and white, and everybody was lost in admiration. The mantel was banked high in white Roman hyacinths, tulips and maiden-hair hyacinths and maiden-hair ferns…
As noted in the article above, in 1902 the Burkhardt home was for sale, and when no willing buyer was interested, it was sold at a sheriff's sale for half of its value. It was just two years later, when then-owner Joseph Joseph passed away. However, the home remained with his wife until 1919, when their son Arthur Joseph took ownership. Arthur and his wife Florence owned the home until  1936 when Robert H. Gibson bought the home. 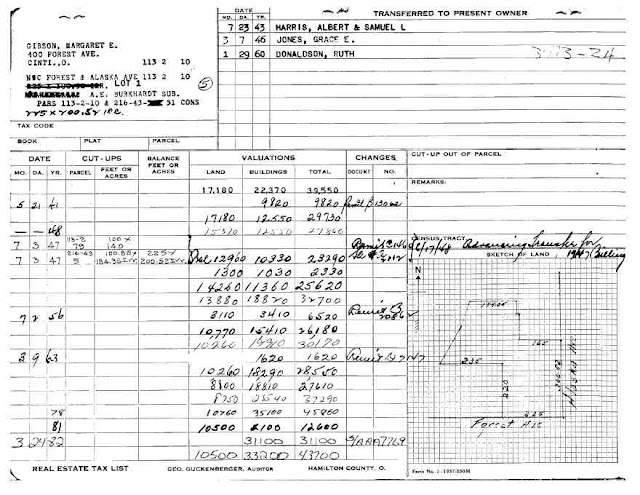 It eventually became a nursing home but now stands empty and decaying. In 2005, a neighbor bought the home to protect their investment and with hopes that someone would buy it and fix it up. However, this has not yet happened. I am not aware if the home is still for sale. It was condemned by city order in 2011.

The home is described as "a Large scale, asymmetrical, two-and-a-half story random rock-faced ashlar building. It is distinguished by a large gable end, stone porch, and corner turret with conical slate cap and finial. The front façade is marked by a projecting boxed gable end enclosing a dentilled cornice, elaborate stone embellishments around a man’s head, and a group of five, twenty-over-one windows with arched lintels… Architecturally, it incorporates elements from the Victorian, Queen Anne, and Romanesque styles." Source

Posted by cincyhistoryluvr at 12:23 AM
Email ThisBlogThis!Share to TwitterShare to FacebookShare to Pinterest