A Facebook follower shared the following photo of 118 East 9th Street, in downtown Cincinnati:
This small two story building is the only older building left on the north side of this block.

It is often recognized by the painting on the side of building. The Hamilton County Auditor dates it to 1875, so I went off digging to find out more about Sam Caldwell & Company plus any more history that I could find. I took a look at the ownership card on the Auditor's website:

Sam Caldwell took ownership of the building in 1945. As can be seen in the photo above, Sam was a painter and decorator. He is most known for painting the outfield signs at Crosley Field. This sign was actually painted by his employee, Charles Keiger, who attended the Cincinnati Art Academy. Sam Caldwell passed away in 1965 and the building was sold in 1970 to a relative of the present owner.

But let's dig a little further back...
Prior to 1895, the address of this property was 18 West 9th Street. You see, Main Street used to be the dividing line through the city, but since 1895, Vine Street is used to determine the east and west sides. The large X over the building identifies it as a stable. Ah, so that is why the garage door is there today!

I started searching through the city directories and census records to find more information.
H. R. Evers is listed in the 1870 directory as a coachman, living at 18 West 9th. He is also listed in the 1875 directory under the same occupation and address. In 1877, his wife Mary passed away and soon after, the Evers family moved away.

In 1880, the city directory lists Morris Venia as a coachman at this address and the census lists him as a "hostler" - which is defined as one who takes care of horses and/or mules. The curious thing about the Venia family is that their name was spelled a variety of ways. When Morris passed away in 1898, his name was listed as Maurice Venie and when his wife Mary passed away in 1900, the surname was Vinet. This can be explained checking the census records, which lists Morris and Mary as unable to read or write.

After the deaths of Morris and Mary, the building was used as an office for veterinarian Louis P. Cook, who was also an inspector for the U.S. Bureau of Animal Industry.

In 1905 and 1910, Nelson Tribue worked as a butler and lived here. By 1912, the building once again has a commercial use, the Prest-O-Lite Company. This company originally was founded in Indianapolis and created acetylene gas powered lights for automobiles before the invention of electric lights. As you can imagine, dealing with compressed gas in 1912 was a danergous business and in 1912, there was an explosion at 118 East 9th Street:
Despite this catastrophe, Prest-O-Lite remained in business at the location until at least 1917, changing their business to include batteries for autos. However, in the directories, they were also listed as having welding supplies.

Going from horse stable to autos seems like a natural progression. After Prest-O-Lite came Foster's Garage in 1918 and Grosse Auto Repair in 1920.

By 1925, welding returned to 118 East 9th Street with Benz-Welsh Welding Company. Also listed in the directory was Fred Gage, storage batteries, and Vass Electric Company. Few changes occurred over the next 15 years, with 1940 bringing a live bait shop to the building in addition to welding and electric.

We have come full circle, with Sam Caldwell who purchased the building in 1945 for his painting business. Presently, it has been owned by the same family since 1970, however, I am unsure of its current use. But Sam Caldwell's paint sign remains on the front of the building. 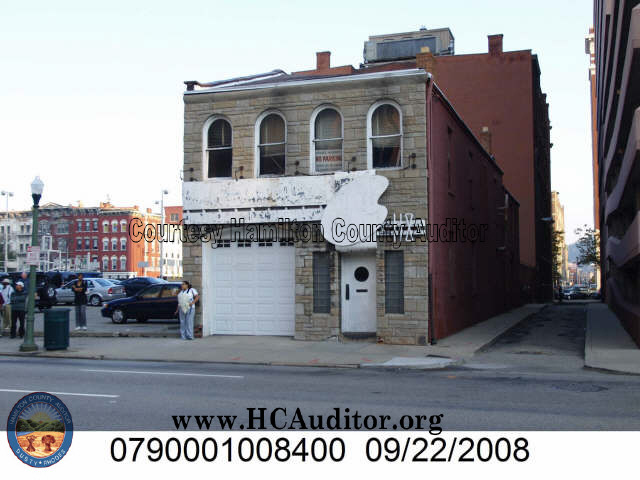 Posted by cincyhistoryluvr at 12:05 PM
Email ThisBlogThis!Share to TwitterShare to FacebookShare to Pinterest