The Woodward Theater is celebrating its 100th birthday today! According to cinematreasures.org, the once-theater at the corner of Main and 14th Streets in Over-the-Rhine opened on June 18, 1913. So in honor of its birthday, I decided to dig a little deeper into the history of this location.
In 1791, William Woodward, who was born in Connecticut in 1768, came to Cincinnati because the area was in need of surveyors, his trained profession. He also farmed and was granted an acre of land near present-day Fountain Square. When he returned from fighting in campaigns against the American Indians in 1792, he married Jane McGowen but she died just thirteen months later. In 1796, William purchased 120 acres from his brother Levi and this land went from present-day 13th Street to Liberty and from Main to Broadway. He married Abigail Cutter in 1803, who inherited money and land from her father, who had been killed by Indians. He built a home from planks of flat-boats as their starter home and in 1816 he built a brick house at the corner of Main and Webster (now 14th) Streets in front of the wooden home. The wooden home stood until the 1860's. - Source

As you may know, William Woodward donated land for both the original Woodward College/High School and a free public school on Franklin Street (now Woodward), which became Peaslee School.


After William's death in 1833 and Abigail's death in 1852, the home was inherited by their niece, Abigail Foster Lewis, whose husband, Henry Lewis was the brother of William's friend. They lived in the home for some time and after her death, the home went her half-brother, Seth Foster, one of the founders of the Stearns and Foster, a prominent mattress company.
Seth rented the home over the years to various tenants. It almost reached its 100th birthday, but in 1912, it was demolished to make way for the new motion picture theater which was named in William Woodward's honor.

The theater opened in 1913, however it closed in 1933, possibly as a result of the Great Depression. In 1935, Andy Schain Auto, Inc. moved in and was in business at this location until some time in the 1940's. 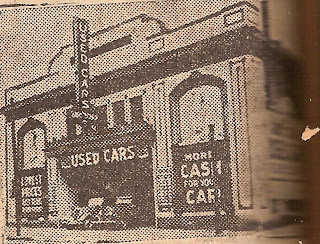 After this, the trail runs dry of what else occupied this space. I found a mention on the Woodward Theater's Facebook page that in the 1970's, bands played here and it was then called "Wanda Bears".


The theater was used as a backdrop for scenes in the movie "Eight Men Out" which was filmed in the city in 1988.

In 1990, the building was purchased by Greg Starnes, who already had an antique shop further south on Main Street. The theater was used as storage until 1995, when he opened it as a second location for his antiques. 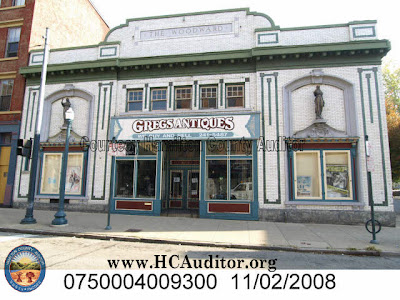 Last year, Greg closed his shop on Main Street and February, 2013 brought new owners, ones very familiar with Over-the-Rhine and Main Street, the same owners as MOTR Pub. Tonight, to celebrate the birthday of the Woodward Theater, the lights on the façade will once again shine as the theater is transformed into an entertainment venue.

Posted by cincyhistoryluvr at 6:11 PM
Email ThisBlogThis!Share to TwitterShare to FacebookShare to Pinterest