The Odeon - Cincinnati College of Music

The Public Library of Cincinnati and Hamilton County has a wonderful Virtual Library full of resources. They posted on their Facebook page this picture of The Odeon and it led me to search more about this building and others on the former College of Music campus.
Many know that the University of Cincinnati College-Conservatory of Music is world-renowned for its programs in music, theater, dance and e-media. However, its history goes back to a time when the College and the Conservatory were two separate schools of music. The College of Music was founded on Octover 14. 1878 by a stock company and managers of the Music Hall Association. The college's first home was Dexter Hall, located within Music Hall (now the Corbett Tower). Within three years, the college built their own campus right next door and a covered bridge was installed to connect the new buildings to Music Hall.
In October 1884, the Odeon was constructed and it was one of the first music schools to have its own concert hall. It was four-stories tall and contained an auditorium with 1,500 seats and an organ, classrooms and practice rooms. A renovation occurred just three years later in 1887. The description from the Cincinnati Enquirer, August 28, 1887 follows:

As one enters from Elm street the vestibule is on the right, but the Grant street or southern entrance is on the left and this had been beautified in harmony with the rest and is intended for the chief entrance. The gateway is garnished with brilliant pillars of mottled gold. As you pass through the gates the mail hall lies on the left, in front are the staircases in oak and ebony, while to the right above and below are found the elegant waiting and smoking rooms of the Odeon. These are among the most unique and exquisite features of the hall, being as perfectly and elegantly fitted up with curtains, hardwood floors, easy chairs, rugs, &c., as if they were in some private mansions. The drop-curtain has been retouched and much brightened, while the walls of the corridors are richly stained with Egyptian yellow, having a dado of chocolate and a border of gold and red. The boxes are transformed, and seem like glimpses of some Oriental palace; from their glistening brass railings depend rich curtains of olive and blue, producing on the whole an effect of magnificence and splendor.

The Lyceum, a smaller hall with 400 seats, was constructed in 1889, facing Grant Street. In 1902, a dormitory funded by J.E. Schmidlapp in honor of his wife was constructed facing Elm Street. On September 5, 1902, tragedy struck the campus when the Odeon and the Lyceum caught fire and were destroyed. The cause was assumed to be electrical wiring running under the stage of the Odeon. The fire was so large that damage was also caused to Music Hall, breaking windows in the roof of the South Wing and causing some of the rafters to catch fire. Heroic efforts by firefighters saved the building from further damage.
Plans were made immediately to rebuild the Odeon. The new hall was completed by November, 1903, but this building had a smaller auditorium of only 700 seats but was made of fire-proof construction. The balcony, constructed of concrete, was the largest ever poured at that time. Here is a description of the "new" Odeon from Cincinnati, the Queen City; 1788-1912, Vol. 2:

Another acceptable reason for the unique place the college occupies among other American schools of music is the fact that it was, until recent years, the only one possessing its own concert hall and theater. This auditorium, listed among the representative theaters of Cincinnati, is called the Odeon, and is a modern building in every respect, being constructed of brick and concrete, and is absolutely fireproof. The Odeon has a seating capacity of 700, and is equipped with large, comfortable, ball-bearing chairs, and provided with ample exits. On the stage is another magnificent new two-manual Moeller pipe organ with electric pneumatic action, while the acoustics of the hall are unsurpassed. The stage is 60 feet in breadth, and so thoroughly equipped with different sets of scenery and appliances as to make possible professional performances by the departments of opera, and of elocution and acting.

In 1921, another dormitory was built, funded by Mrs. Frederick Alms and in 1927, an administration building was added, facing the new Central Parkway. In 1955, the College of Music and the Conservatory of Music merged after attendance at the Conservatory had dropped. The College-Conservatory joined the University of Cincinnati as its fourteenth college in 1962.

The following photos from cincinnativiews.net are a wonderful look at these buildings, which all except one, are no longer with us. 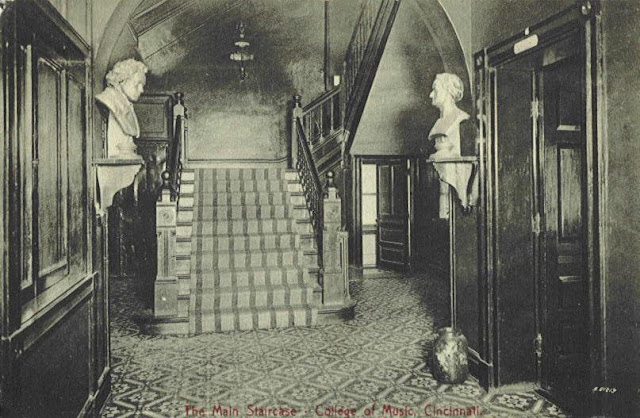 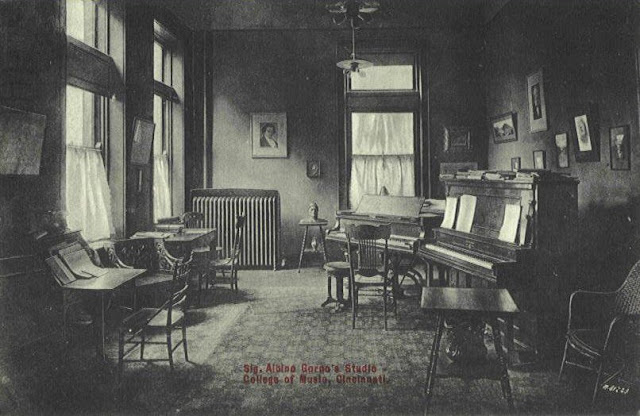 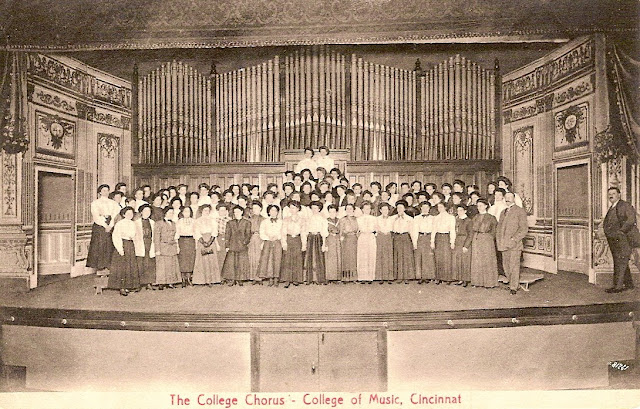 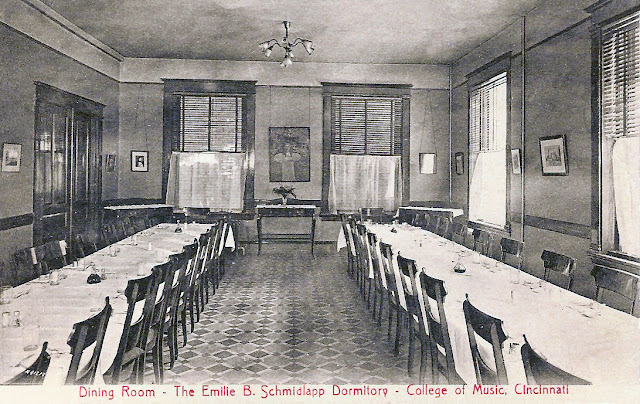 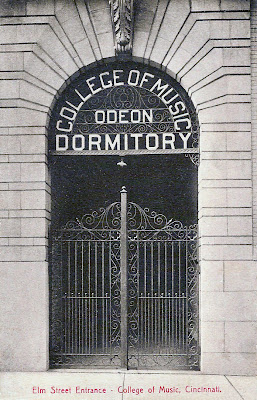 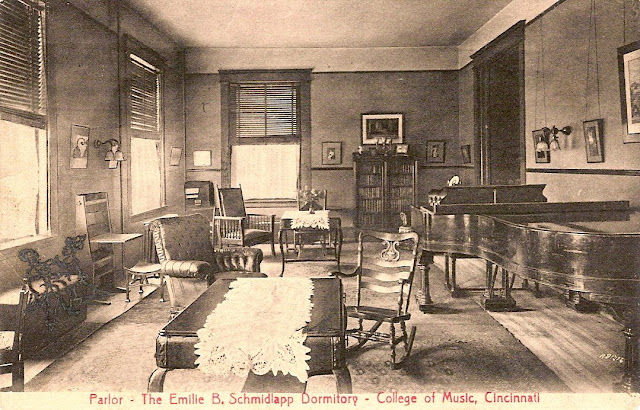 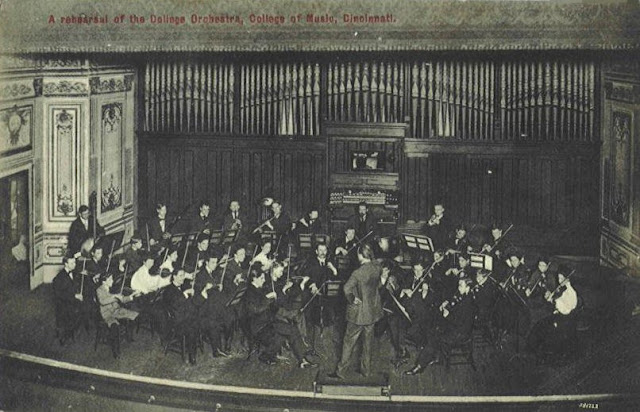 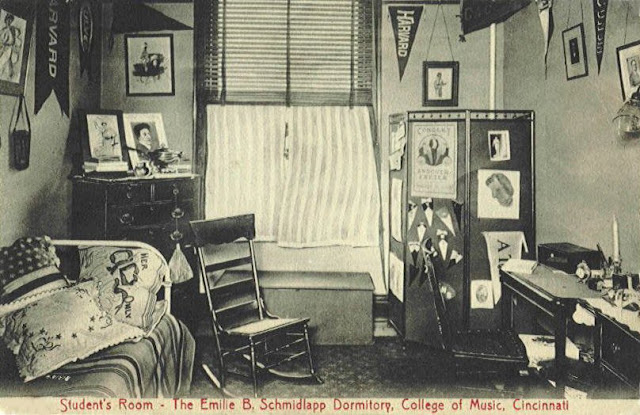 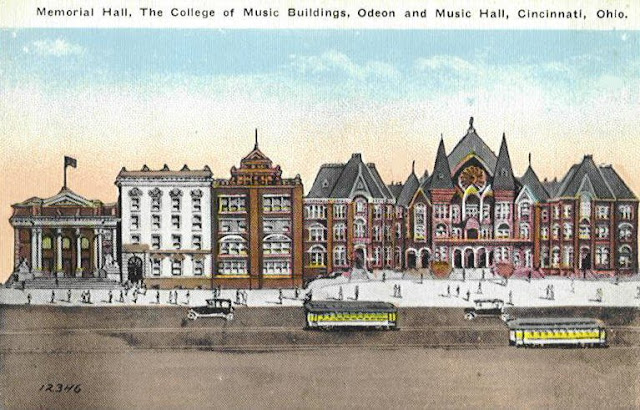 Posted by cincyhistoryluvr at 3:35 PM
Email ThisBlogThis!Share to TwitterShare to FacebookShare to Pinterest