History of the SE Corner of Fourth and Vine

Who would think by looking at the National City Tower at the corner of Fourth and Vine today that this corner has so much history?

Starting back in 1859, Pike's Opera House opened here. It was owned by Samuel Pike, who was a wealthy liquor dealer, who wanted a world-class theater in Cincinnati. This theater sat 2,000 people, was decorated with black and white marble and had a grand stairway.
Seven years later, a large fire brought this theater to the ground.
However, just a year later, a new Pike's Opera House rose from the ashes, this one larger, encompassing half the block of the south side of Fourth Street between Vine and Walnut. Pike's Opera House was the home of the Cincinnati Symphony Orchestra until its move to Music Hall in 1896. Powel Crosley, Sr. was in charge of the opera house operations.

Again, tragedy struck the Pike' Opera House on February 26, 1903, when another large fire completely destroyed the building. A newspaper article from the Cincinnati Enquirer states it was the largest fire ever at the time for the city with 27 engine companies responding to battle it. The following snippet shows the losses incurred.
For over a year, the corner of Fourth and Vine sat vacant as settlements between bondholders and owners were made. Finally in 1905, plans were made for the construction of a new hotel. The Sinton Hotel was completed in 1907 and just one day shy of the fourth anniversary of the fire that destroyed the Pike's Building, the Sinton Hotel was opened with great fanfare.
The following descriptions come from more Cincinnati Enquirer articles:

Cafe Of Marble and Pottery Will be Chief Feature of Sinton Hotel
A cafe of unsurpassed grandeur, finished in rare marbles and Rookwood pottery panels, with a great spreading dome above, rising 55 feet above the marble floor, is to be the great feature of the new Sinton Hotel… F.M. Andrews, architect of the great building… gave a description of the dining facilities… He has visited all the leading cafes and hotels of the country, and said… that he believed the main café of the new hotel would equal if not surpass anything in the United States.
As a matter of fact, there are to be 16 dining rooms in this great building. Twelve of these will be private dining rooms. One will be an immense banquet hall, with its own kitchen, on the upper floor, with a capacity for seating 600 guests. Another will be a magnificent grill room down stairs for men. Another will be an exquisitely appointed Ladies’ dining room. Still another will be a private dining room in what will be called the state apartments…
Cincinnati Enquirer; Aug 22, 1905; pg. 5

SCENE: Of Splendid Brilliance Was Formal Opening of the Hotel Sinton--Society Turned Out En Masse
Over 2,500 men and women, it was estimated from the elevator service, inspected the new Hotel Sinton yesterday. The rush became so great about 4 p.m. that the main doors were closed for an hour. The sides of the lobby were banked with huge bouquets of roses, carnation and ferns and floral pieces sent by friends. Over 200 congratulatory telegrams from cities in 30 states were received by Managing Director E.N Roth and Chief Clerk Frank M. Jago.
The rivalry for the first place on the register was won by Andreas Burkhardt, and M.E. Moch secured that state suit for last night…
Six hundred guests dined last night at the Sinton. Interest centered in the grand cafe, where 400 guests were seated. Everybody was in gala dress…
Cincinnati Enquirer; Feb 26, 1907; pg. 7


The Hotel Sinton (or the Sinton Hotel, both interchangeably used), was originally built with 450 rooms, however an additional 300 rooms were also added. For 57 years, this hotel stood at this corner and provided food and lodging for tenants and travelers alike. The following postcards of the interior come from Cincinnativiews.net, a wonderful collection of photos of Cincinnati. 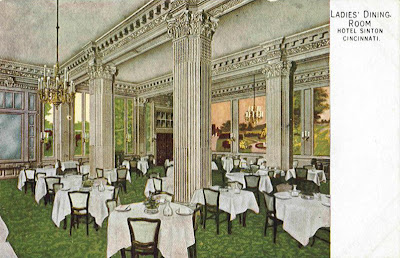 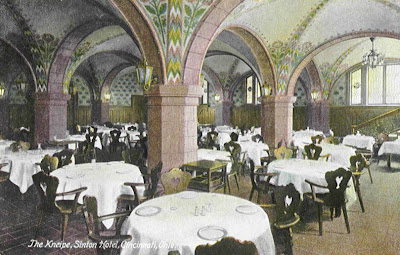 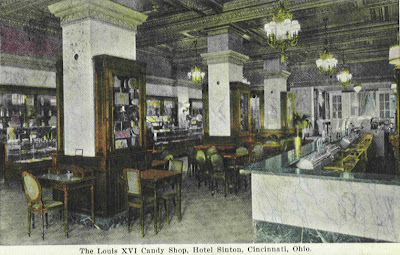 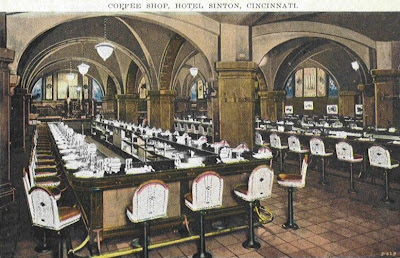 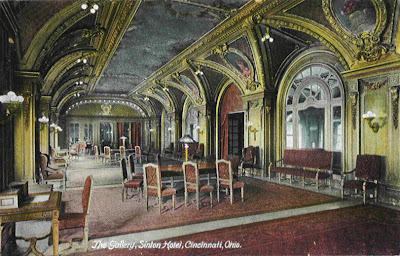 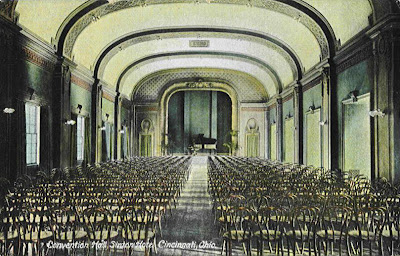 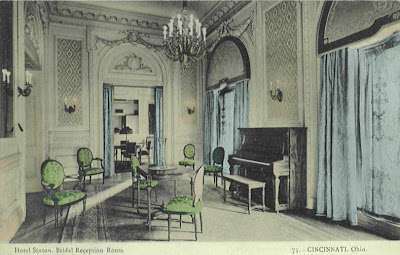 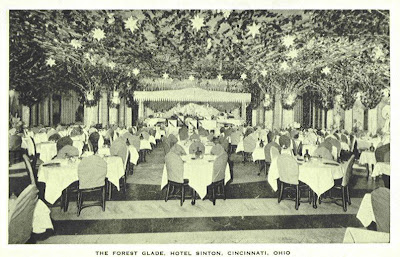 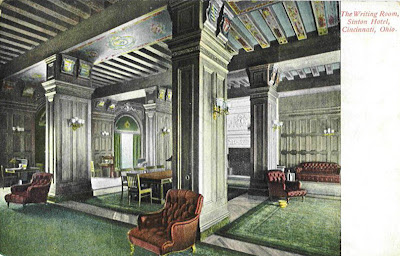 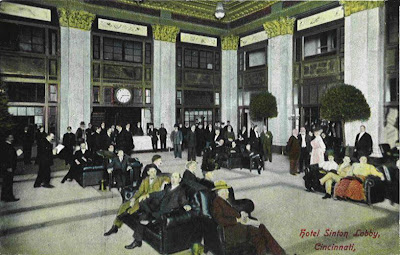 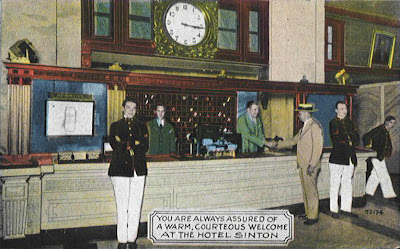 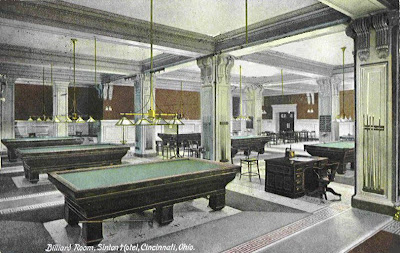 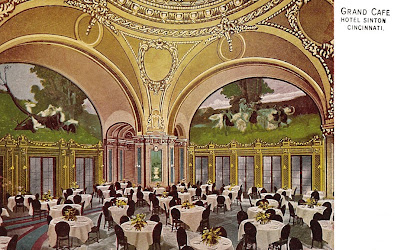 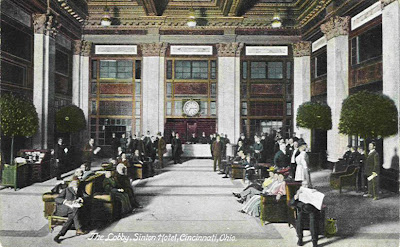 Sometime in the Sinton's history, the name of the hotel was put in lights on the outside of the building. As is apt to happen, the bulbs would occasionally burn out, leaving one letter in the dark. As you can image, when the "T" in Sinton, was burned out, some jokes were made when the hotel became the "Hotel Sin On" instead!

In 1964, plans were made for the Sinton to be torn down and replaced with an office tower. The hotel had closed its doors due to financial problems and outstanding property taxes. This corner was seen as one of Cincinnati's prime business locations and the city was going through a redevelopment phase. This was also during the "Space Age" and it seems this old hotel was lost to a modern office building. In September of 1964, an auction was held to sell items from the Sinton, everything from barber chairs to crystal chandeliers to luggage left from visitors.

But before the auction, on September 11, 1964, the Sinton held a farewell party. The following article comes from the Cincinnati Enquirer the following day:

Ghosts from Cincinnati’s past would not be hushed Friday night.  They whispered and tugged incessantly at the 500 business, political and social leaders who put on satin dresses and black ties to attend the Hotel Sinton’s farewell to the city it has served 57 years. But they were good ghosts. Nobody really resented them – least of all Mayor Walton Bachrach and his wife who had their first date at the hotel’s old “Chatterbox.”
Nor did William Earls Sr., now 91, look upon the wraiths with anything but nostalgia. He was a young man, just come to Cincinnati, when the building was going up at Fourth and Vine Sts. “This farewell is a sad affair and a glorious event,” remarked Mr. Earls, referring to the demolition soon to take place for a 35-story office building. His son, William T. Earls, added, “But I don’t cast any tears at tearing down thing which aren’t useful anymore.”
Above the clink of the champagne glasses and the sound of the dance music, Charles L. Heekin noted, that he was born in 1907, the year the Sinton was built… And Mrs. Edmund T. Lunken couldn’t help but remember the parties she has attended over the years in the Louis XVI Ballroom. She added, however, “It looks like an opening instead of a closing.”
Councilman John E. Held brought up something he has noticed while standing near the entrance to the ballroom. “They’re coming in, looking as if for the first time, and saying, ‘Isn’t it a shame?’” Mr. Held added, “This 57-year-old girl is simply too old to die.”
Then, from Vincent H. Beckman, Democratic leader, came the comment, “Old grace and charm must give way to the new – which I’m sure will be wonderful for the city.” But Councilman Theodore M. Berry added, “For those who have watched the Sinton over the years this is a rather nostalgic occasion.”
Nearby was Jerry Hurter, once and executive of the old Times-Star, who remembered the hitel from his days as a young reporter. He recalled how John L. Horgan, former manager, who was also present for the farewell, used to give away Sinton-brand tins of coffee and boxes of candy to those who made good showings in “block” dances. “It was good coffee, too,” Mr. Hurter added.
James R. Clark, Jr., former county commissioner, put the evening into perspective. “Have you noticed how some people are stamping their cigarettes out on the floor? I’ve heard them say, ‘It doesn’t make any difference now.’“  They were right. It didn’t make any difference – in practical ways.

The Sinton came down and in 1968, the Provident Bank Tower opened. This is now called the National City Tower after that bank's purchase of Provident Bank in 2004. It is the 19th tallest building in Cincinnati, standing at at 263 feet and 20-stories tall. Such a varied history of one little corner in Cincinnati!

Posted by cincyhistoryluvr at 1:19 PM
Email ThisBlogThis!Share to TwitterShare to FacebookShare to Pinterest