History Fun on a Budget

The e-mail came with our second Mission for Livin’ In The Cin: plan a weekend of fun for less than $50.00. Well, of course, I had to find history-related fun! I started with the Cincinnati USA’s 2013 Official Visitors Guide and went through circling many things related to Cincinnati and its history. Then I had to narrow it down. This was hard! There are so many things to do in Cincinnati that really won’t break your budget.


So for my first day I decided to go “old school” and use the old Queen City Tour guidebook, last updated in 1996, to learn more about Cincinnati. This tour was originally designed in 1970 by the Greater Cincinnati Beautiful Committee along with the Cincinnati Chamber of Commerce and was meant to be a driving tour to highlight to locals and visitors the sights to see in Cincinnati. The iconic signs of purple and gold could be seen along this route for many years. The tour was updated in 1996 and so I went to the Main Library on Vine Street to get our copy. 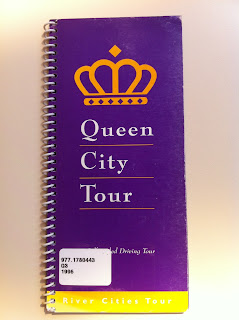 However, since we (my daughter and I) were already downtown, we decided to make this a walking tour of the area. We started where the book starts, Fountain Square, the heart of our town. It was lunchtime and we were enticed into the Westin Hotel to get lunch at Ingredients ($13.14). 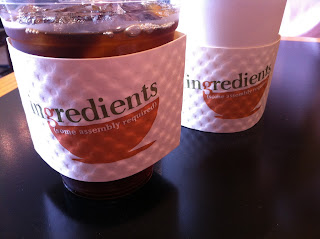 After our bellies were full, we started following the tour, going east on Fifth Street to see such sights as the United States Courthouse, the Cincinnati Masonic Temple/Taft Theater, and Procter and Gamble. 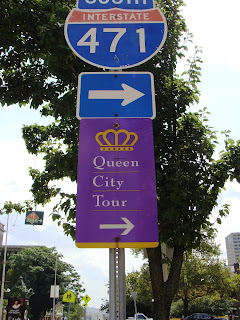 Turning the corner at Pike Street we found a Queen City Tour sign! We headed back on Fourth Street and stopped to look at the Taft Museum of Art, Lytle Park, the Literary Club, the former Guilford School, Western-Southern, the University Club, the Queen City Club, Christ Church, Cincinnati Gas & Electric, Dixie Terminal, the Bartlett Building, the Ingalls Building, PNC Tower, the former Gidding Jenny storefront and Tower Place, all the while reading along in our tour book, learning more history than we knew before! 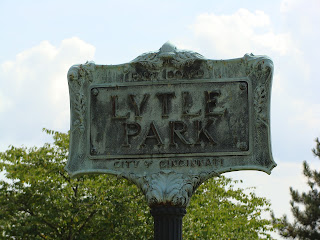 We turned up Race Street and headed back to Fifth, making a stop in the Hilton Netherland Plaza to admire the architecture and stopped at Abby Girl Sweets in the Carew Tower Arcade for a sweet ending ($5.50) to our walking tour of just a small area of our beautiful downtown. We left our parking spots under the fountain ($8, it was a weekday) wanting to take more of the tour another time. This truly could be a whole weekend trip alone, if you stop to visit the insides of many of these buildings and sites. Check out a copy of the book from the library or you can use this blog, where they have marked all the sites and have even added some new ones! http://queencitytour.blogspot.com/

Our next trip out, this time with my husband and our son on a Sunday afternoon, we learned about one of our nation’s presidents at the William Howard Taft National Historic Site, the only national park in our city. This tour is free to everyone and they are open seven days a week from 8:00 am until 4:00 pm except for New Year’s Day, Thanksgiving Day and Christmas Day. We learned a lot about this hometown boy and the home that he lived in for his youth. We also learned about his time serving the nation in his many positions from U.S. Solicitor General, to governor of the Philippines, to President of the United States and finally Chief Justice of the Supreme Court. He was well-loved in his time and it was a great experience learning about Will Taft. 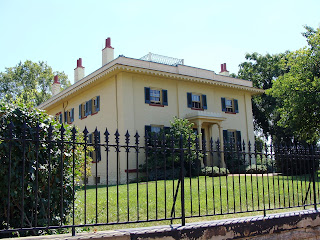 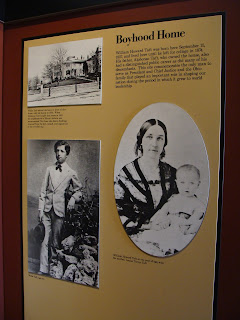 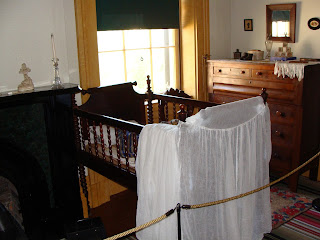 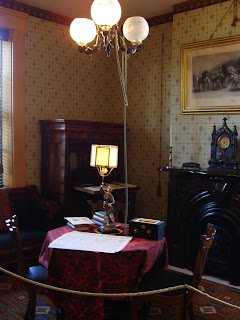 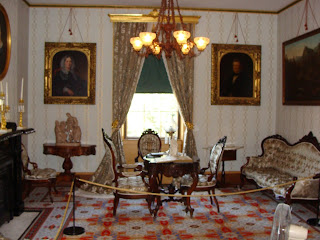 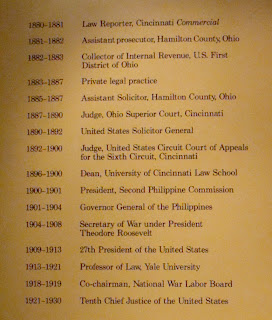 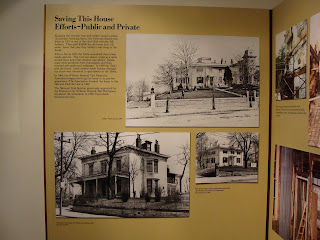 After visiting the Taft house, we drove up to Mount Lookout to see the Cincinnati Observatory, which is a National Historic Landmark. The Observatory was founded in 1842 on Mount Ida, which was renamed Mount Adams after a visit from President John Quincy Adams, who laid the cornerstone on the original building. The Observatory offers historic tours on the 2nd and 4th Sundays from 1 pm to 4 pm. Donations of $5.00 are requested but not demanded. 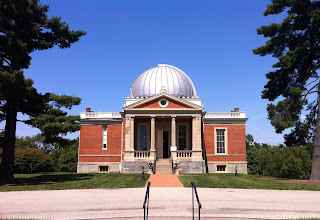 After taking a look at the large sundial next to the parking lot, we picked up on a tour about halfway through, where we entered O.M.  Mitchel building, the smaller of the two buildings. We learned about the 1842 Merz and Mahler telescope and, with a solar lens, we got to take a look at sun spots and a solar flare. 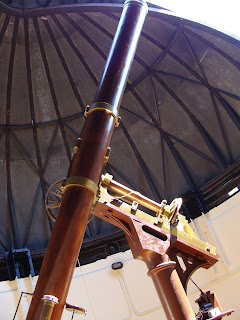 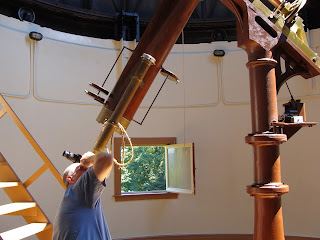 We then headed back to the main building and went upstairs to see the 1904 Alvan Clark and Sons 16-inch telescope. We took a look inside the telescope to learn how the light from space is focused into our eyes and also learned how the dome operates. 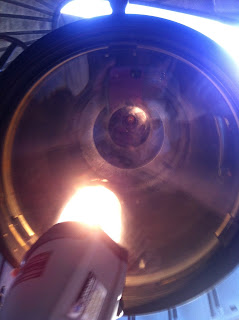 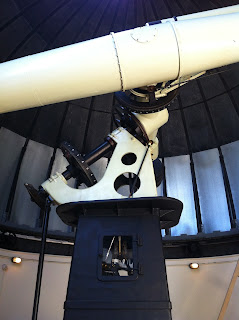 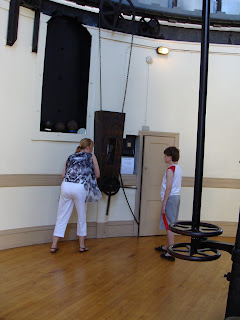 We went down to the basement to see the German-made clock that once served as the official time for the City of Cincinnati. Back on the first floor, we looked at exhibits that explained more about the history of the Observatory and some of the scientific research that has made the Observatory world-renowned. 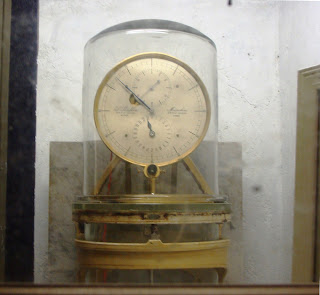 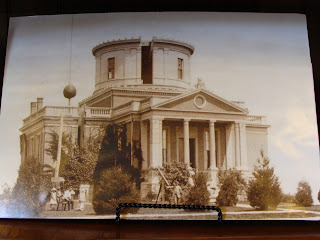 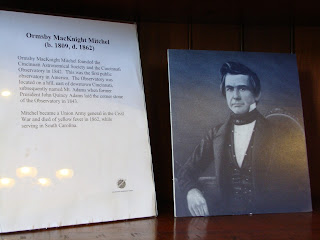 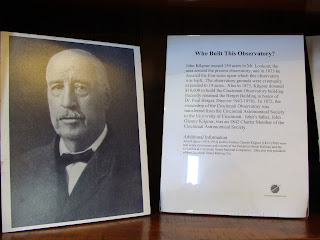 Since our visit to the Observatory was so inexpensive and we had money left to spend, we topped off our Sunday afternoon with a trip to Graeter’s ($13.51) in Hyde Park Square to end our weekend of fun on a sweet note. Total spent was $45.15 but the value of the memories made and the things we learned are priceless! 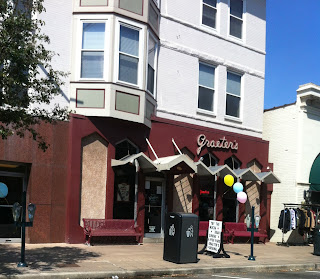 More photos from our trips can be seen on my Facebook page: https://www.facebook.com/diggingcincinnatihistory 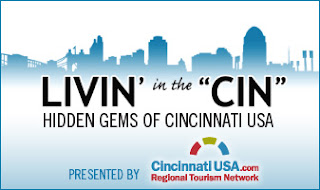 Posted by cincyhistoryluvr at 2:16 PM
Email ThisBlogThis!Share to TwitterShare to FacebookShare to Pinterest