You may not guess from the appearance of this building at the corner of Ashland and Burdett Avenues in East Walnut Hills that it was once home to the first Walnut Hills High School:
Now home to the Schoolhouse Lofts, this building was completed in 1895. Discussions began in 1891 of the need for Walnut Hills to have its own high school, as the community was growing and over-crowding became a concern at Woodward and Hughes Schools. Plans for the building were submitted to the Board of Education on June 23, 1893 by architect H. E. Siter. The building was to cost $100,000 for a three-story building plus an attic. 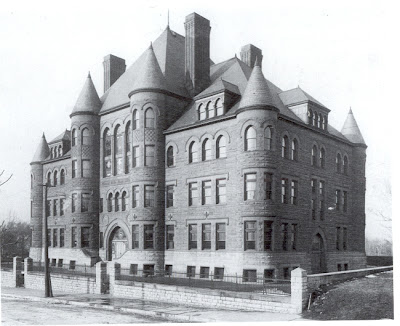 The building opened on September 10, 1895 for the first day of school, with approximately 623 students. A dedication ceremony was held on October 11th of the same year. A Cincinnati Enquirer reporter described the building as such:


The school started as a traditional grades 9 to 12 high school, but in 1919, it was decided to changed to a classical high school for grades 7 to 12 with a college preparatory program, which continues today. With the increased enrollment the building soon became too small and overcrowding was such a problem that in 1922, with 970 students expected, two portable buildings were erected. Soon after, discussions began for yet a bigger school and in 1929, plans were approved for the "new" Walnut Hills High School which still stands today on Victory Parkway. This new building was expected to cost $1,200,000 to complete and opened in 1931.
What was to become of the old building? Discussions in 1933 included converting the building into a college for African-Americans, but it lacked community support:
The building was then converted into the Burdett Elementary School. On April 4, 1963, a fire set by a student in a third-floor cloak room destroyed the fourth-floor attic and caused the building lose its turrets and attic. The decision was made to replace it with a flat roof to allow the school to remain open. In 1979, the school closed and the building was put up for sale.
Vandals did not take long to begin to damage the building. In 1980, developed Patricia Brumagin attempted to purchase the building for $55,000 to turn the school in a 40-unit condominium project, but these plans fell through. Then in 1982, the building sold to Fred Craig for $45,000. Craig planned to convert the building into 30 apartments but needed to seek placement on the National Register of Historic Places to receive tax incentives. This would have most likely involved restoring the roof and turrets to the building. Unfortunately, this plan did not come to fruition either and the building remained vacant for the next twenty-two years.
In 2004, Keith Glaser of the Excalibur Development Corporation began work on the building to create the Schoolhouse Lofts. The projects was estimated to cost $6.1 million and planned for 31 condominiums with seven different floor plans, all with two bedrooms and two baths. The units became available in 2005 with an average price of $175,000. However, trouble began in 2009 with the crash of the housing market and the developed ran out of money to finish the units. Andy Howe of Cranewoods Development, LLC, came in during 2011 and finished the five remaining units. 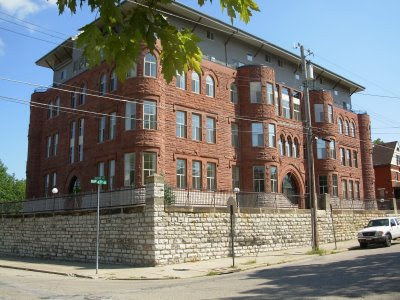 Luckily with developers like Glaser and Howe, this building remains standing today. Developer Fred Craig stated in a March 8, 1982 Cincinnati Post article, "I've always liked old things. I lived in Europe at one time. I saw there what preservation means. People recognize the fact that just because something is old, you don't have to tear it down."
Posted by cincyhistoryluvr at 11:20 AM
Email ThisBlogThis!Share to TwitterShare to FacebookShare to Pinterest