This building has caught my eye quite a few times when driving on Central Avenue and when a client asked if I could research the history of the building, I was excited to start digging.
While the Hamilton County Auditor says the year built is 1883, the actual construction most likely began in 1876, when Joseph Longworth and Catherine Longworth Anderson purchased the lot from Isaac Betts. Both of these names have a long connection to Cincinnati history, so let's dig a bit more on those...
Joseph Longworth (1813-1883) and Catherine Longworth Anderson (1815-1893) were the children of Nicholas Longworth (1783- 1863), who has been called the "Father of the American Wine Industry". Nicholas was born in 1783 and came to Cincinnati around 1804. He was a successful banker and also owned large parcel of land. He made his fortune by selling off parcels at prices that increased with the demand of the quickly growing city. Nicholas was fascinated with grape cultivation and believe Cincinnati's climate and land were an ideal place to experiment. Mount Adams was his laboratory, and he planted the hillsides with the Catawba grape. He was able to make a sparkling wine that was successful world-wide.
Joseph Longworth married Anna Maria Rives in 1841 and they lived at their estate on Grandin Road, which was called "Rookwood" due to the many black birds (rooks) that lived there. Their daughter, Maria Longworth Nichols Storer founded Rookwood Pottery, named after her childhood estate. Joseph and Anna's son, Nicholas Longworth II, was an Ohio Supreme Court Justice and their grandson, Nicholas Longworth served in the Ohio House and Senate as well as the US House of Representatives and  Speaker of the House from 1925 to 1931. In 1906, he married Alice Lee Roosevelt, daughter of President Theodore Roosevelt.

Catherine Longworth married Larz Anderson in 1834. Larz's father, Richard Clough Anderson served during the Revolutionary War. Their son, Nicholas Longworth Anderson, served during the Civil War as Brevet Major General.
Isaac Betts (1809-1891) is the son of William Betts (1763-1815), a veteran of the Revolutionary War, who first arrived in Cincinnati in 1800 and settled in the West End in 1802. He built his brick home in 1804 on present-day Clark Street on a plot of land which was originally 111 acres. William was not only a farmer, but also a brickmaker. His sons Smith, Oliver and Isaac continued the business after their father's death. The farm was subdivided in 1833, after William's 12th and youngest child reached the age of 21. Clark Street was named for William's mother, Elizabeth Clark Betts. You can read more about the Betts Family here.

The building at the corner of Central Avenue and Clark Street was completed by 1880, when the first tenants begin to appear in the city directories. Since this building expands nine addresses, the list is quite long and varied.
1880 Williams' City Directory - Source

As you can see, the building was a mix of commercial space on the lower floors and apartments above. Munro's Bath-House, at present day 1201 Central Avenue, had a tragic incident which occurred in 1888.
After the deaths of Joseph Longworth and Catherine Longworth Anderson, ownership transferred in the late 1890s to Catherine's daughter-in-law, Mary Douglas Anderson. By 1900, the bath-house is under new ownership after the Munros' moved to a new location. Tenants and businesses changed often over the 20 years:

Over the next 40 years, the pattern stays much the same. Ownership changed from Mary D. Anderson to Union Savings Bank and then Samuel Shapiro in 1924. Tenants and businesses came and went, however, by 1940 it is evident the building has fewer of both:
Nedelman Hyman (Bessie) shoe repr 1203 Central av h3468 Knott 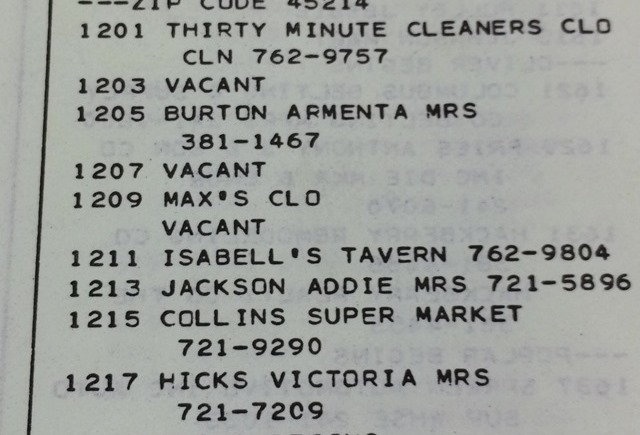 By 1970 (above), three of the apartments are vacant and by 1980, the entire building is empty of tenants and businesses. For the next 17 years, the building is listed as vacant in the directories. In 1996, the building was purchased and renovated into apartments. In 2001, these apartments were changed to fifteen condominiums, called the Turrett Lofts. These condos are a popular choice for those wanting to live close to downtown in a beautiful, historic building.

Posted by cincyhistoryluvr at 12:57 PM
Email ThisBlogThis!Share to TwitterShare to FacebookShare to Pinterest