A regular client, Andrew Howe of Cranewoods Developement LLC, recently purchased a condo in this building and he wondered about the full history of the building. It is widely known that it was a school house, however he wanted to know what other uses the building had before its conversion to condos.
According to the Annual Report of Cincinnati Public Schools, written in 1868, construction on the school building began in November, 1866, after David Sinton sold the lot of land on Liberty Street. The architects were William H. Stewart and William Walter and the building was finished in August, 1868. The total cost of construction, including the lot, was $90,045.

The annual report includes a detailed description of the building:

This building is 66 feet wide by 112 in length all the exterior line of the walls; is four stories high above the cellar on the front and west sides, three stories high above the coal cellars, for two rooms in length, on the east side of the hall. It has six outside entrances; has one principal stairway from each of the main entrances, and one flight of stairs from the west side to the first main floor. The stairs are of iron, supported in the walls, and have neat hand-rails on each side. The building has 21 school rooms, and an office for the Principal. The front rooms in the fourth story can be thrown into one by means of a rising partition. The Janitor has three rooms. All the school-rooms, but the three in the basement, have wardrobes, which are entered from the rooms only. Two rooms marked" C," on the basement plan, are for coal and changeable furniture. There is a cellar beneath all but the two last named rooms. Seats are provided for 1,200 pupils.
The heating is done by JOHN GROSSIUS’ “New Patent School-house Stove,” supplied with a cold-air flue taken into the heater between the joists of the room, lined with zinc. Provision is also made for warming by "indirect" radiation by steam-pipe coils in chambers, or by furnaces. Each room has two flues, 8 by 16 inches, lined with tin, furnished with 10 by 16 registers, to convey the warm air, should this method of warming be used-one ventilating flue, 12 by 21 inches, in the walls, lined with flooring, and neat pannel work in the rooms, finishing on the roof with Emerson's ejecting ventilators. In the rooms these flues connect with platforms that have neatly perforated risers for the exit of the air at the floors in cold weather, and have sliding valves moved by cord and pulley at the ceiling of the room for the escape of the warm foul air.
Fourteen school-rooms have light from their two external walls, seven school-rooms have one outside wall, and receive the light from one side only. The walls from the bottom of the water-table are built with brick. The dressings and weatherings are of free-stone, cornice of galvanized iron; the roof is of Vermont slate, flashings of lead, lightning rods of copper. The plastering on the walls is finished under the float, and colored and blocked to imitate granite. The surface of the lot, inside of the fence walls, equals 1,700 square yards, and is paved with brick. The surface of the lot in the rear of the house is elevated nearly fifteen feet above Liberty street, and is reached by flights of stone steps, as shown on basement plan. -
Annual Report, Volume 39 (Google eBook); Cincinnati (Ohio). Board of Education, Cincinnati Public Schools; 1868 – Cincinnati, Ohio

The report also included the following drawings of the building: 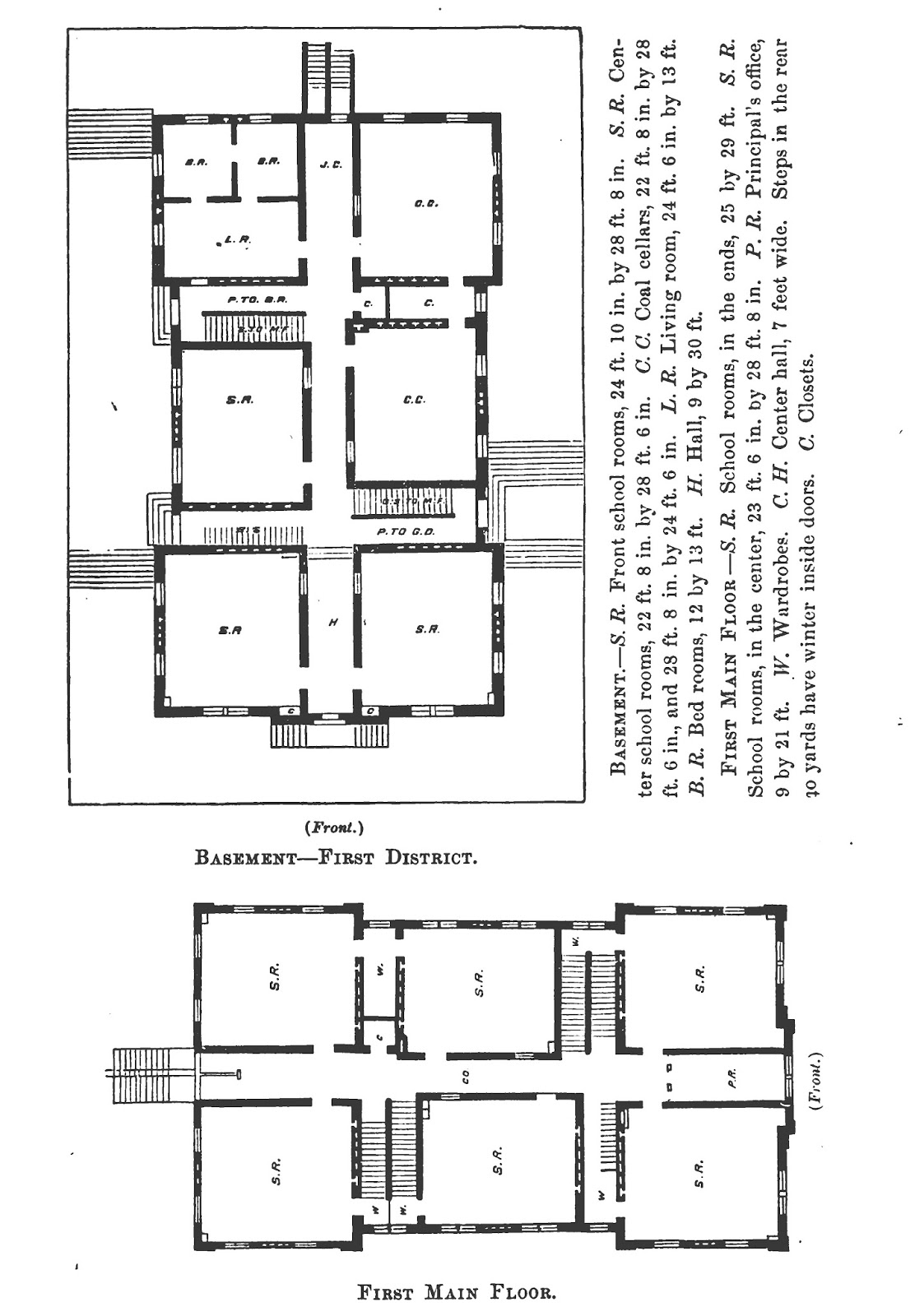 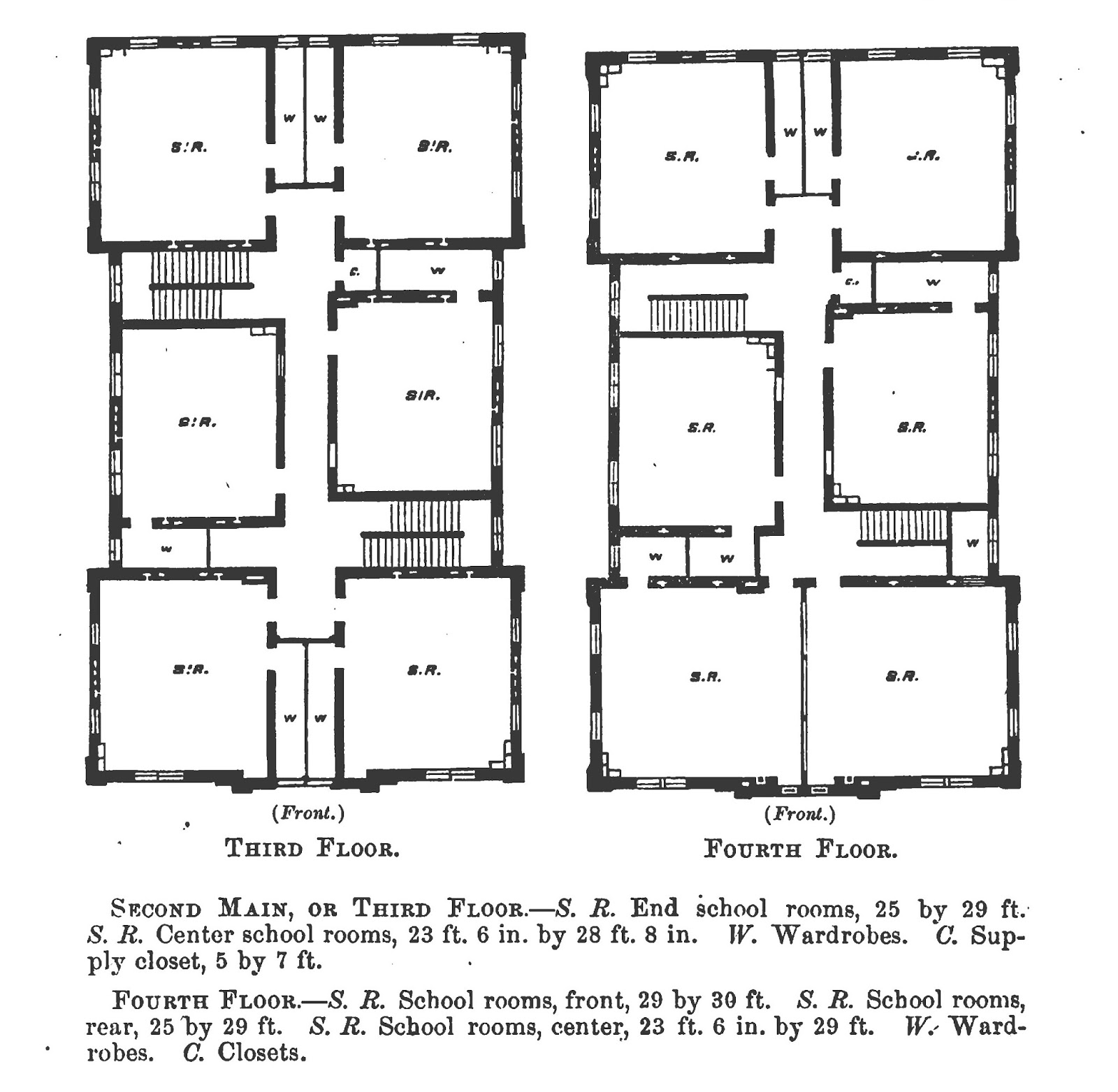 A fire occurred in the school on April 11, 1911, luckily during the lunchtime break and it was noted in the Cincinnati Enquirer article that few students were in the school at the time. All students and teachers who were in the building escaped without injury. The fire was suspected to have started in a defective flue and spread quickly because of the large ventilation shafts throughout the buildings. The shafts allowed burning embers to travel down to the lower floors and basement. One of the classrooms on the third floor fell down upon firefighters but all were uninjured, except for some cuts and bruises. The entire roof in the front of the building was destroyed along with six classrooms and estimates of total damage were $5,000 to $8,000. Classes continued in other parts of the building while repairs were underway.

In 1914, the Rothenberg School was ready to accept all the students from the First District School. However, the building did not remain vacant for long. It became the Boys' Special School, used for vocational training. In 1918, it was used to house soldiers training for World War I.
The building remained as a vocational high school until the early 1940's. Various plans for the building were considered, including using it as office space for the Recreation Commission. In 1945, it was auctioned and conversion began into 24 apartments for veterans returning from World War II.
In 1978, the then-vacant building underwent conversion from apartments into condominiums as the Prospect Hill neighborhood underwent a renaissance, By 1980, the conversion was just about complete, after finding difficulties in financing the project. The condos are successful today and some of the 1980 original buyers are still living there. It is a testament to how vision and hard work can turn around a vacant 100+ year old building into desirable housing today.

Posted by cincyhistoryluvr at 10:02 AM 2 comments:
Email ThisBlogThis!Share to TwitterShare to FacebookShare to Pinterest
Newer Posts Older Posts Home
Subscribe to: Posts (Atom)