I am so sorry for the bit of a sabbatical. I have been busy keeping up my Facebook page and researching for clients. However, it was recently brought to my attention that the Dennison Hotel building on Main Street with its iconic ghost sign was sold with the intent for possible demolition. So I was asked to dig into the history of the building to see when and why it was constructed.
The building was originally constructed in 1892 for the G. B. Schulte Sons Company. They were in the iron and steel business, making springs, axles, wood work, blacksmiths' and wagon makers' tools, carriage and wagon hardware, according to their listing in the Williams' City Directory. The company purchased the land in 1891 and demolished the prior two-story building.
The G. B. Shulte Sons Company remained in business at this location until 1930,when it evidently closed either from the Great Depression or the increase in sales of the automobile. In 1931, Globe-Wernicke Service Company and Kelsall-Voorheis Inc, both office furniture companies, announced they would be using the first three floors of the building. The rest would be converted into a hotel, originally called the Main Hotel until 1933, when it was changed to the New Dennsion Hotel. The original Dennison Hotel had been located at Fifth and Main Streets and was demolished in 1932. 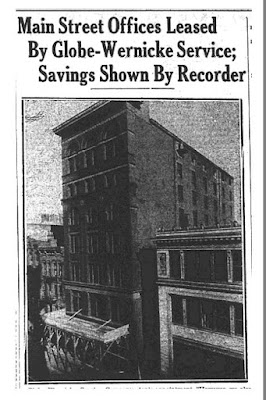 In 2011, it was announced that the building had been purchased by The Model Group and, with help from 3CDC and the Cincinnati Metropolitan Housing Authority, the building would get a renovation to 63 studio apartments, but continue to serve as low income housing. Entitled the Ironworks Apartments, Talbert House was to provide supportive services for the residents and a storefront cafe for a place for residents to gain job experience.
However, these plans did not come to fruition, and in July, 2013, the building was sold to CBD Holdings Inc. for $1,277,473. Just one month later, the building was sold again to the Columbia Oldsmobile Company for $744,431. There has not been a public announcement for the reasons for the sale, but word on the street is that the newest owner plans to demolish this building. Observers noticed this week that dumpsters were in place, but the workers at the building declared they were just removing leftover bedding and other items that could be a fire risk. The Cincinnati Preservation Association is aware of this possible demolition and have put it on their watch list.

Posted by cincyhistoryluvr at 9:24 PM
Email ThisBlogThis!Share to TwitterShare to FacebookShare to Pinterest