Auto Laundry? Maybe not what you think...

A follower recently reached about a curious-looking building on Court Street, seemingly out of place as compared to the surrounding buildings.

It clearly is different from the typical Italianate style that is more common in downtown and Over-the-Rhine. I took a look at the Sanborn Insurance Maps from 1891 and 1930, and discovered some significant changes:

The  1887 and 1891 maps show that the building standing at that time was a three-story brick building. A look through the city directories showed it was used for commercial purposes, with businesses such as a china, glass and queensware dealer, a commission merchant, a wholesale confectioner (mmm, candy!), the American Toilet Supply Company, and the Troy Laundry Company.

In 1919, the building was sold, and renovation plans were made:

Harry Hake is a noted Cincinnati architect, who also designed many buildings on the campus of the University of Cincinnati, and other notable works.

So this building was originally designed to be a car wash, and not an automatic laundry for clothes! I was unable to locate any images of what the interior of this building looked like, however I did discover this image: 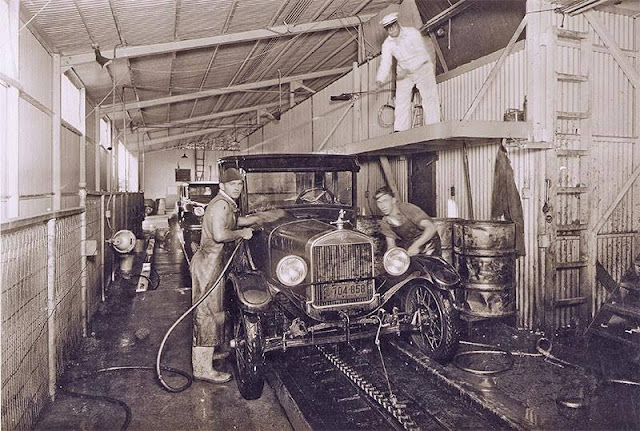 In this era, a car wash was based on the assembly line, where a conveyor, often manual, would pull the car down the line, where workers would perform a task in stations as it went down the line.

By the mid-1930s, the car wash had closed, and the building became a service garage. and by the 1950s, it was used as a parking garage. As of today, it appears to still be used as a private parking garage.
Posted by DCH Ann at 7:02 PM
Email ThisBlogThis!Share to TwitterShare to FacebookShare to Pinterest