Often identified with the Cincinnati girl turned silent film star Theda Bara, this house stood at the corner of Ledgewood Drive and Victory Parkway from 1924 until 2011. But did you know there is no evidence that she ever owned or resided here? 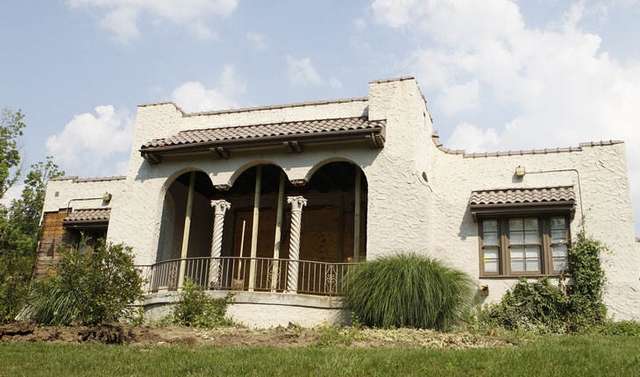 Deed records show the lot was purchased by May Droesch in 1923, and plans for the Spanish-style home were made shortly after. Droesch was a real estate investor, but also had a connection to the film industry, as she owned a chain of theaters in the area along with Ignatz and Julius Frankel. Her parents, Joseph and Mary Droesch also lived in the home. Mary died at this home in 1929, and May left to live in Atlanta, Georgia in 1932. Her father continued to live here until the following year, moving to Atlanta as well, until his death in 1945. May died in Atlanta in 1949.
Owners between 1933 and 1968 include Raymond and Lorene Frankel (1933-1942), Coleman Harris (1942-1949), Lillie Goldsmith (1949-1953) Lillian and John Lutz (1953-1956), and Ida and Clifford Schaten (1956-1968).
In 1968, Xavier University professor, Dr. Joseph Link, purchased the home. He also had previously purchased a Tudor-style house next door in 1955, and had built additional buildings in this area including Manor House Apartments, University Apartments, and the present-day Jesuit Residence. In 1979, Dr. Link agreed to sell all the buildings to Xavier University in 1989. Once acquired by the university, the Droesch house was used as housing for religious sisters, and later as a residence for honor students. At the time of demolition, it was said the stucco was falling from the house. Xavier stated that they had removed historically significant parts for preservation.
So there is really no connection to Theda Bara. I dug through city directories and newspaper articles to see if it was ever mentioned that she stayed here on her visits to or through Cincinnati, but nothing was ever mentioned until it was sold in 1968. So perhaps she did visit May Droesch or Raymond Frankel between 1924 and 1942, but this was not her Cincinnati home.
Posted by DiggingCincinnatiHistory at 5:55 PM
Email ThisBlogThis!Share to TwitterShare to FacebookShare to Pinterest