This home came to my attention because, like so many of our historic homes in Cincinnati, it has been neglected and is under its second review as a public nuisance.
This home is on the National Register of Historic Places as the Mary A. Wolfe house, supposedly built in 1888 and designed by the Samuel Hannaford firm. So I went off digging to find out who else had owned it. I was in for a surprise...
I always like to start with current maps, to see if I can line up the property or the parcel with an older map. So I went back to 1869...
Ok, first surprise! The land where the home at 965 Burton Avenue is today was once an African American cemetery. Something else to note, Burton Avenue was then called Clinton Street. Remember, at this time, Avondale was a separate village outside of Cincinnati. There was also a Clinton Street in Cincinnati, in the West End, near the new Taft Information Technology High School on Ezzard Charles Drive.

After looking through some city directories for Mary A. Wolfe in 1888, I figured out whomever placed the home on the National Register got the two Clinton Streets mixed up. Mary Wolfe did live on Clinton Street, but in the West End, not Avondale. Second surprise! So who built this home on an old cemetery and where were the beloved dead moved?

As you can read above, a controversy started in 1880, when an African American state representative presented a bill to the legislature to close the Colored American Cemetery in Avondale. Members of the African American community came together to oppose the closing. A portion of the speeches is below.
The bill was not passed and the cemetery remained open. That was until 1883 came along and I found the following articles:
Wow, the above article was shocking for me to read. I hope the bodies were all removed by their families and given a proper burial, not thrown in a trench! It appears from further research that the land was purchased by the neighbor next door, the Evans family, who appear on the 1869 map above.

The land stayed vacant until 1894, when the present home was built for George W. Dittman (sometimes also spelled Dittmann). He was co-owner of a prosperous shoe making business in Cincinnati, Krippendorf & Dittman. He was born in Missouri in 1849, was married to Abbie and had four children - Florence, George, Edmund and Ruth.

The Dittman family lived in this home through the early 1900's. George passed away in 1925 and Abbie in 1926. They are buried in Spring Grove Cemetery, along with Florence and Ruth, who never married, and  Edmund and his wife Clara. The home was sold in 1928 to Jennie Erman, a widow, who lived with her son, Effie, an insurance agent. The Erman's lived here until at least 1940.
You can see from the ownership card below, the property changed hands quite a few times from 1940 until 1974. At some point in the 1990's it became a nursing home.
As you can see above, it seems interior details were removed when the home was converted. Recent reports from 2009 and 2010 state the home has a leaky roof with damage occurring to the floors, causing them to be ready to cave in and of course, because of the water, mold damage is also apparent. Other comments can be seen on this blog post from 2010. The home was condemned on September 24, 2012 for structural damage, vandalism, and neglect. 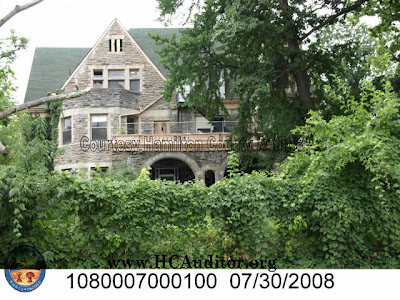 Even with obstacles to face, a home that has merited a place on the National Register of Historic Place should receive more care and attention. I will update this blog post after the hearing on January 25, 2013. If you would like to attend, the hearing will take place at 1:00 pm at 3300 Central Parkway.
2020 UPDATE - This home was demolished in 2019. Some of the architectural elements were saved for future use. Watch a tour of the building before it was torn down.
Posted by cincyhistoryluvr at 9:14 PM
Email ThisBlogThis!Share to TwitterShare to FacebookShare to Pinterest