I researched the subject for this post over a year ago, but I thought the story was interesting to share with all of you. A follower contacted me for information on the house when he purchased it in 2012, so I did some digging and came up with a couple of surprises.
Using 1869 Titus Map and the legal property description, I came upon my first surprise. The lot where this home was constructed was originally owned by one of the founders of Procter & Gamble, James Gamble.
James Gamble's own home was on Clark Street, south of this location, so it appears this land was purchased as an investment. The Hamilton County Auditor dates the construction of this home as 1865, which seems to be a pretty accurate date based on the city directory information and the architectural style.

Using the 1891 Sanborn Insurance Map, I discovered the address for this house was 50 York Street before the 1895-1896 street renumbering project. This allowed me to research the city directories to discover the residents of the home. In 1865, three names were listed: Anton Buerckle, a finisher, Jacob Kern, a laborer, and Charles Reitzel, also a finisher. However, in 1870, only one name is listed: Harrison Dexter, a lumber dealer whose business was located just down the street at the corner of York and Freeman. However, the 1870 Census doesn't list him as the owner of the property, so he was renting this from another person.
The Dexter family moved closer to their business in 1886 and in 1888, my next surprise was revealed. When I looked at the 1891 map, something caught my eye...
Right over the top of 46, 48 and 50 York Street is labeled "Christ's Hospital". I knew Christ Hospital is now in Mt. Auburn and also knew of the support the Gamble family had given it over many years, so this got me curious. I started digging in the Cincinnati Enquirer archives and found this:
So it appears James Gamble owned the home and had given use of it to the founders of Christ Hospital as a place to begin their work. In 1890, the following people were listed as living at 50 York Street:

In 1893, the hospital and deaconess home moved to Mount Auburn and the houses on York Street once again became rental properties. Between 1903 and 1918, the Gamble estate sold the property to Charles Richt, and he sold it to Bertha Schaub, who is living at the home in 1920 with her adult children and another family.
After a series of sales between 1925 and 1929, Ida Laugel owned the home until 1946, renting it out to various families over the years. The ownership card below shows the owners until 1990. 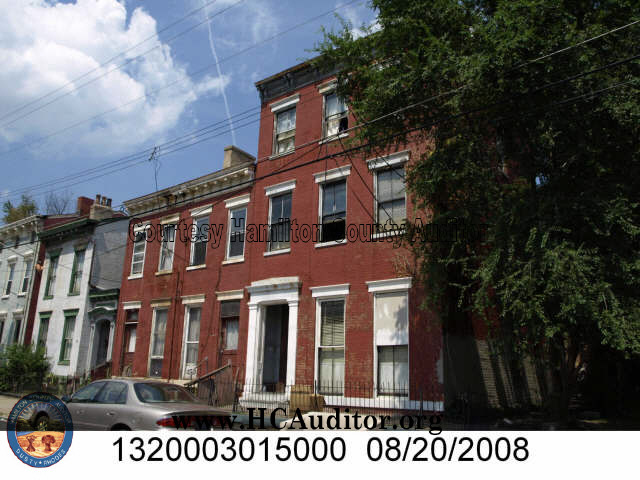 Of the three original Christ's Hospital buildings, only this one remains standing. In 2012 and in 2013, the home was sold again but from the photo at the top of this post, it appears to be vacant, awaiting the current owners to breathe new life into this house of surprises.
Posted by cincyhistoryluvr at 12:43 PM
Email ThisBlogThis!Share to TwitterShare to FacebookShare to Pinterest