Cincinnati - The City of Seven Hills?

A Facebook follower asked if I could clarify the age-old question of Cincinnati's Seven Hills. Being situated in a basin with the hills rising up on all sides, it has been compared to Rome since Cincinnati's early days. So I searched and searched and here is what I found.

The question is one that is frequently asked at the Public Library of Cincinnati and Hamilton County. The first mention was in the West American Review, in "Article III--Cincinnati: Its Relations to the West and South." The hills in this list are: Mount Adams, Walnut Hills, Mount Auburn, Vine Street Hill, College Hill, Fairmount, and Mount Harrison (known now as Price Hill). 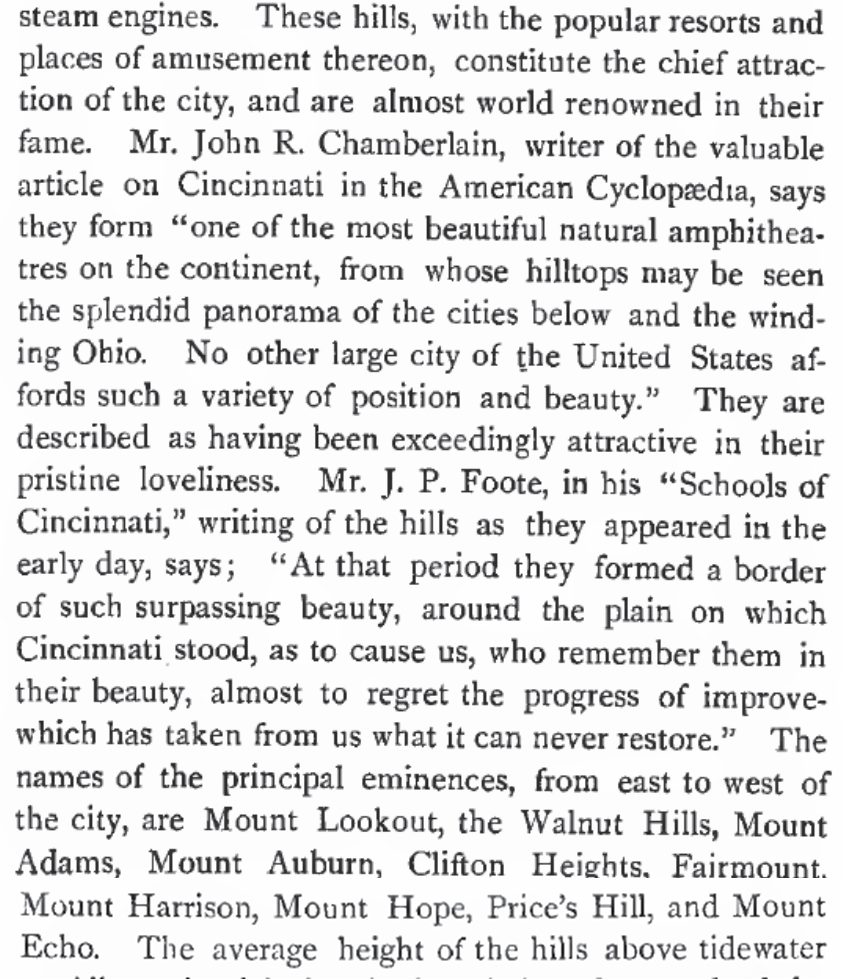 This question has been debated in the newspapers over the years as well!
In December, 2008, the Cincinnati Enquirer listed these seven with descriptions:

It has been said that Cincinnati was built on seven hills, just like Rome. Of course, the city has way more than seven hills. But here’s a list adopted by the Enquirer in 1958.

Mount Adams
Named for former President John Quincy Adams, who spoke at the dedication of the city’s observatory in 1843.

Mount Auburn
Cincinnati’s first hilltop suburb had this name by 1835. An Englishwoman in the area named it either for a line in a poem by Oliver Goldsmith or a garden cemetery in Boston.

Walnut Hills
The original owner, the Rev. James Kemper, called his property Walnut Hill Farm. Heirs divided the property and the area became known as Walnut Hill. The “s” was in place by the 1850s.

Fairmount
A businessman began developing the village in the early 1850s, and the name might have come from a park in Philadelphia, but it was probably a marketing ploy to suggest a pretty village on attractive high ground — not swamp land.

Fairview Heights
The neighborhood’s name came into use in the late 1860s from Fairview Avenue, probably because the hilltop provided a fine view of Mill Creek Valley.

Clifton Heights
Here’s marketing at work, 1850s-style. The neighborhood was next to Clifton — a plus for status-conscious buyers — and it’s on top of a hill.

Price Hill
Originally called Bold Face Hill (reportedly for an Indian who lived in the area), the land was owned and developed by merchant Evans Price and his son, Rees. Rees laid out a subdivision in the vicinity of what is now Eighth Street and State Avenue and established a sawmill and brickyard there. By the 1830s, a small village was at the bottom of the hill.

And the library at the University of Cincinnati has this list:


I guess the question will never be clearly answered, however we can all agree we love our City of Seven Hills (except in the winter snow)!
Posted by cincyhistoryluvr at 11:48 AM
Email ThisBlogThis!Share to TwitterShare to FacebookShare to Pinterest