So I mentioned in my first post about the farm house I grew up in located Colerain Township, Hamilton County, Ohio. Here is a little bit more about that house.

The land was part of the Symmes Purchase and was bought by Benjamin Davis, sometime before 1834. He is shown in the 1840 U.S. Census living in Colerain Township with his wife, Mary (Corson) Davis and their two daughters. They eventually had seven children. Mary passed away in 1881 and Benjamin in 1887 and are both buried in the United Bethel Cemetery across the street from the house. Benjamin Davis was a founder of the local Bethel United Brethren Church:

It then passed to Elias Frey, who was a blacksmith. He was living here during the Civil War, when Morgan's Raiders came through Hamilton County. Pictures can be seen here: Colerain Township By Frank Scholle, Don Linz


"Mr. Elias Frey, Marty Frey’s grandfather, operated a shop in the 1850's. During the Civil War, Morgan’s Raiders passed through this area, and forced the Frey's at gunpoint to shoe their horses. Elias, Jr. took over the business later. Another son, Louis, operated a “wagon maker” shop next to the blacksmith shop."
Researched by Dennis Haskamp and published in the October 2009 Coleraine Historical Society Pageant. Reference

Here is a map from 1869, showing E. Frey, J. Lebrock (Leibrook) and Benjamin Davis' properties:
The U.B. Church is at the corner where the cemetery still exists today. You can also see other members of the Davis family owned property in this area as well. We believe the house was actually on the Liebrook property here.

In the 1930's, the Kress family lived here. We had the opportunity to interview two of the sisters, who gave us lots of information. In the late 1940's, the Teuschler family owned it and at some point, turned it into a two family house. The living room was divided so a bedroom would be on the first floor and a kitchen was added on the second floor. There was a separate side door entrance to the upstairs.

My mom always dreamed of owning a "big, old farmhouse" and in 1979, her dream came true. We finally had enough space for all of us; Dad and Mom and five kids. The house came with almost an acre of land, since the building of I-275 was built on the northern part of the original parcel. It also had a barn for us to explore (and for my brothers to turn into the "party barn") and an old garage that had once held pigs. The garage had originally been a building from the Lotspeich School (which is now part of the Seven Hills School) which was dismantled and brought to the land and rebuilt as a animal pen and garage.

The house stayed in my family until 2005. Mom had passed away suddenly in 2002. Dad was getting remarried and moving to his new wife's home. I think most of my siblings would have loved to buy it, but none of us were in the position to do so at the time. The current owners have made some nice improvements that I see when I drive by, like adding a wooden fence to the front yard. It's nice to see someone taking good care of "her".

Posted by cincyhistoryluvr at 2:07 PM 4 comments:
Email ThisBlogThis!Share to TwitterShare to FacebookShare to Pinterest

See What Digging Can Find?

Here is an example of what I have found on a property in just a few days. This property is in the Over-The-Rhine neighborhood of Cincinnati, north of Liberty. 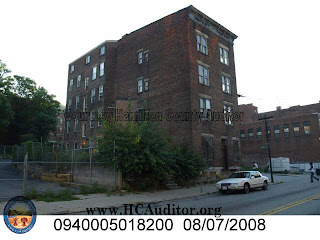 This property originally had two buildings on it. One was a single family home which, unfortunately, was demolished. The other was a tenement building, dating from 1870, which was common housing for the working people of Over-the-Rhine. (For more information on OTR, check out this website - http://www.otrfoundation.org/OTR_History.htm)

The following research mainly focuses on the single family home.

From 1856 until his death in 1878, George Lang lived at this property. He was portrait, scenery and historical painter, born in Bavaria, Germany in 1816. He was well know at the time for his religious paintings in some of the churches in the area. George Lang, Artist

While George was still alive his daughter, Josephine, married Otto Saur. The whole family, George, Josephine, Otto, and George's sons, Charles and George, Jr., are all living at the same address in 1877. Otto and Josephine Saur continue to live here until 1896, when they moved to Norwood, Ohio.

While in Over-the-Rhine, Otto Saur was the proprietor of The Lion Lager Beer Bottling Company until approximately 1879. This was about the same time when the local breweries took over bottling beer themselves. Before this time, the breweries often contracted out the bottling. More information here - http://www.sudhauspress.com/modernized.html

After leaving the bottling operations, Otto Saur continued working in the brewery industry with the The John Kauffman Brewing Company and also Gambrinus Stock Company.

In 1897, John Kimmich, who was a tailor, began living there with his family until 1904. Records for 1905-1907 were hard to find in the large city directories. In 1908, Mary Siermann, who was a widow, lived there with her daughter along with a roomer, Joseph Kruse, a cigar maker. My research stopped on this project in 1910 with Charles Mueller living here, working as a machinist.

I also found along the way how often street names changed. A small side street, now called Frintz Street, first started off as Poplar Street, then Oak Street, then Cambria Street and finally Frintz Street in 1890. It was named Frintz Street after a former City of Cincinnati Council member who grew up in the area and also had served in the American Civil War, Lewis (Louis) C. Frintz.

See what a few days of research can find? This city has an amazing history!

If you have a building or another local history item you would like to know more about, leave a comment!

Posted by cincyhistoryluvr at 9:21 AM 2 comments:
Email ThisBlogThis!Share to TwitterShare to FacebookShare to Pinterest

So, if you are a crazy history researcher like me, when you find an amazing collection of resources in one convenient spot, it's like finding gold under the sea.

Here are a few of my new found favorites:

www.ancestry.com - While this is a site you have to pay for, I often use it first because searching is so quick and easy. It all started last year looking for birth parents and has led me to research my family tree along with at least 4 other families.

www.familysearch.org - An amazing, FREE site! I have found birth records of German ancestors, death certificates which gives me names of parents and countless more information.

http://virtuallibrary.cincinnatilibrary.org/VirtualLibrary/Default.aspx - WOW! I am speechless about the amount of information on this site. The availability of searching Cincinnati City Directories has opened up a whole new world of researching old and/or historic buildings in this fair city. I just wasted away about 30 minutes of my afternoon just "paging" through the "Boyd's Handbook of Cincinnati", printed in 1869, found under the "Old and Rare Books". BEWARE - this site is dangerous to one's free time!

These are my current "go-to" sites, but then there is also just a good ol' fashioned Google search that can be amazing to what you can find.

A little more about me...

This is my first adventure into blogging! I thought I would share how my addiction to Cincinnati history began.

I have loved Cincinnati history from the time my mom took us to the Cincinnati Historical Society Library to research the old farm house in Colerain Township that we lived in at the time. I was amazed with how much was available to find. My sister was working on a history project for school, and they researched the house and property all the way back to the Symmes Purchase.

Then came my time to do a local history project in elementary school and I choose The Union Terminal. Ah, what a wonderful building! I, unfortunately, am too young to remember it as the amazing train station it was built to be. But to see how amazing it was started a desire to learn more.

So the spark was lit. And now, with the wonderful internet, so many documents are available at our fingertips that make research a bit easier. I like researching from home because if I went to the main public library, I don't think I would ever leave. Researching is a treasure hunt and I often find myself cheering (to myself, of course) when I find that bit of history that can link pieces together or break down a brick wall of questions.

I recently have researched the James N. Gamble estate in Westwood along with his family genealogy, 1314 Vine St for Cincinnati Preservation Association, properties in Knox Hill area of South Fairmount for the Knox Hill Neighborhood Association, and other sites in Cincinnati to share with other  fans of Cincinnati history.

So look for a new post coming soon about a Cincinnati building or family. And let me know if there is something you would like to know about!
Posted by cincyhistoryluvr at 11:16 AM 1 comment:
Email ThisBlogThis!Share to TwitterShare to FacebookShare to Pinterest
Newer Posts Home
Subscribe to: Posts (Atom)