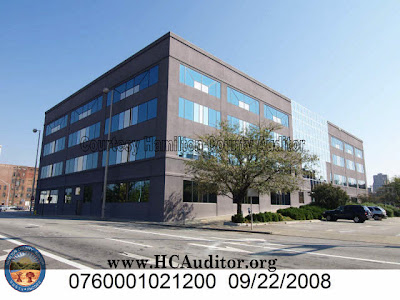 Posted by cincyhistoryluvr at 12:58 AM 5 comments:
Email ThisBlogThis!Share to TwitterShare to FacebookShare to Pinterest

A few days ago, I re-posted a photo on my Facebook page from Vanishing Cincinnati's page of the canal that once ran through downtown Cincinnati. One building in particular caught my eye:

It has such a curious shape and I just had to know more. The original address of this property was the southeast corner of S. Canal Street and Vine Street, which today is the corner of Central Parkway and Vine Street, where the headquarters of the Kroger Company stands today.

Before 1878, this location was used as a pork packing house, but in that year, the building was leased out and converted into a theater, known as the Vine Street Opera House.
A mention in King's Pocket-book of Cincinnati in 1879 says:

Vine-street Opera-House, southeast cor. of Vine and Canal Streets, a variety-show theatre to which only men are admitted. The Vine street cars pass the door.

The theater was run by a former chief of police, Colonel Thomas E. Snelbaker and headlines were made when he had a run-in with the father of a former mistress, who also happened to be a police officer. The Cincinnati Enquirer also reported on this incident in greater detail (click the link to read the article).

In the early morning of January 4, 1882, fire struck the opera house. The newspaper account notes that the theater has been such a success that it gained the nickname, "The Gold Mine." It had been renovated at least twice since the packing house days, going from 800 seats to 1,400 seats at the time of the fire. The opera house rose from the ashes and was rebuilt and opened again for business on May 14, 1882.
Competition with Heuck's Opera House, just over the canal in Over-the-Rhine, and "a reputation as unsavory as the odor from the musty canal when the water has been let out of it" (Enquirer, Dec. 2, 1900) took its toll and after the 1887 season, the theater closed. In 1889, it became the German Theater however, by the fall of 1893, it was the barracks of the Salvation Army for the next three years.
In December, 1900, the building once again returned to its theater roots and it was renovated once again. The manager, John Avery, made plans to host burlesque and vaudeville shows but a cleaner version than had been presented previously. Avery also returned to the Vine Street Opera House name. However, his plans were unsuccessful and the theater closed within a week of opening, leaving actors stranded without work in the city.

Plans to revive the theater occurred throughout the first five years of the new century and a commitment was finally made in June, 1905, with yet another renovation for updating and addressing safety concerns. It was renamed The Standard Theater and its first season was noted as a success in the Cincinnati Enquirer. Rudolph K. Hynicka, Republican politician under "Boss Cox", was the manager for many years along with Charles B. Arnold.

The theater remained open through the 1915 season but closed again, due to the emergence of film entertainment and the decline of vaudeville and burlesque. For a short time it became a motion picture house, The Boulevard and then in 1929, it was The Civic.
The year 1930 brought the demolition of the old theater along with three other buildings that lined the east side of Vine Street from Central Parkway south to Court Street and also included four houses that faced Court Street to make way for a 20,000 square foot parking lot.
Then in 1957, plans for the present skyscraper came to fruition and what we commonly call The Kroger Building was completed in 1960. It was originally designed with a blue and white pattern but in 1980, it was re-skinned with aluminum.

The photo above sums up nicely the changes Cincinnati went through from the days of the canal to the emergence of new technologies which brought new development to the edge of "downtown". From pork to burlesque to grocery headquarters.

Posted by cincyhistoryluvr at 2:13 AM 2 comments:
Email ThisBlogThis!Share to TwitterShare to FacebookShare to Pinterest

The Anna Louise Inn - A Look at the Past

With the announcement that the Anna Louise Inn will be moving from its historic location at Lytle Park this week, I decided to do some "digging" and share some newspaper articles from over the years. Click on the articles to be able to read them. Some articles are links to a pdf format. Enjoy!


Article from The Cincinnati Industrial Magazine, 1909

This site serves as an educational and historical reference resource. It is intended only for educational use. The stories listed below are copyrighted by their respective publications and should not be used for any commercial purpose. They are provided for private use only.