I took a great walk last week around Over-the-Rhine with my husband and a friend. We were on the hunt for any names we could find in doorways and on buildings. After finding this one last year, my friend knew of more. This one really caught our eyes at 1225-1227 Main Street:

My friend remembered there once was a sign on the building in the shape of a pipe. Well, off I went to dig on this one, since the title name seemed so detailed and old. But it was odd that the store front actually is part of two separate buildings. 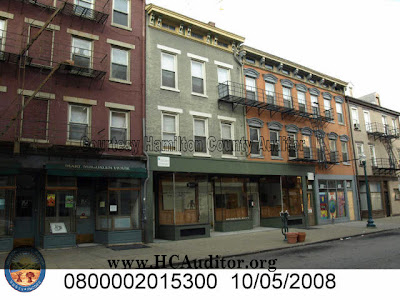 This took a lot of digging but it turns out this location dates at a tin shop as early as 1851 run by John Mesker, with help from Joseph Busse, Bernhard Niehaus and Jacob Cooper. Right next door, at 497 Main Street was a "coffee house" (another name for a saloon) run by Frederick and Henry Luening, just 26 and 23 years old, respectively, immigrants from Oldenburg.

In 1860, the tin shop was owned by Joseph Busse who also ran a stove shop. The census records show that Mr. Busse owned the building valued at $6,000. Next door, Mr. Leuning owned the building at 497-499 Main along with his brother, Henry. This building was valued at $11,000. Fred ran the saloon and Henry was a merchant tailor. What is a merchant tailor, you ask? Well, it is defined as "a tailor who keeps and sells materials for the garments which he makes".


Through the 1870's and until 1885, this situation remained the same with the families growing. In 1885, while, Fred Luening is still living at 497 Main, it is no longer a saloon. A different merchant tailor is in this location and 499 Main has become "GOTTMANN WM., Dealer in Wall Paper, Window Shades, Table and Floor Oil Cloths, Toys, &c,". By 1890, Joseph Busse is no longer in the tin shop and 495 Main has become the shoe & boot store of J. Joseph Lagemann.

Well, where are the Keyer's? Louis Keyer, Sr. and his family lived at 70 Abigail Street (now 322 E. 12th Street, a parking lot). He was a turner, making pipes, umbrellas and canes. His son, Charles, followed in the family business. In 1896, Louis and his family moved to 1225 Main Street and had their shop below. Louis passed away in 1897 and Charles took over the business. In 1904, he had a home built at 2716 Eden Avenue: 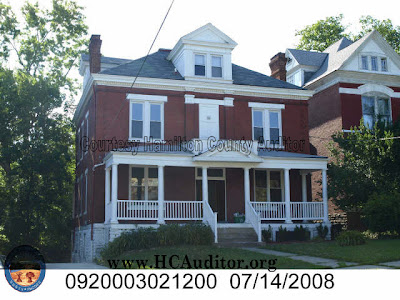 From the looks of it, Charles was doing quite well! The business expanded to the 1227 Main location around 1920. This must be when the tile was added to the entrance. In the 1930's, as part of the Ohio Federal Writers' Project, this photograph was taken of the Keyer Pipe Manufacturing:
I am not sure who is at the machine. It could be Charles or his son, William, who took eventually took over the business. The business was still open in 1958 under the name of Keyer Pipe and Umbrella House and run by Judson W Gabbard. Gabbard sold the business in 1965 upon his retirement, having worked at Keyer since the late 1930's (see the comment below). I found this great packaging while searching:
A reader submitted this picture of his great-grandfather's pipe, complete with the case, stamped "Louis Keyer, Cincinnati, O" 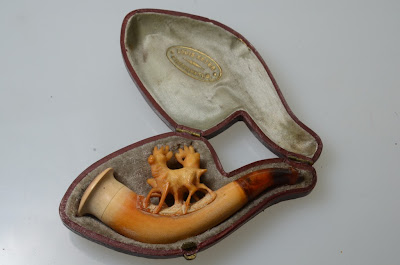 Recently, BASE Gallery, a cooperative gallery partially sponsored by the City of Cincinnati, had used the space. The building is currently owned by Franciscan Homes IV, a non-profit housing group for the apartments above.
Posted by cincyhistoryluvr at 5:35 PM
Email ThisBlogThis!Share to TwitterShare to FacebookShare to Pinterest