No More Horsing Around

2021 UPDATE - Since the original date of this blog post, the Bay Horse Cafe and Roadhouse is alive and well, sign and all!
As a follow up to my last post, I have some sad new. The Bay Horse Cafe sign is no longer on the building. No news yet on where it went. One can only hope it is on its way to the American Sign Museum. 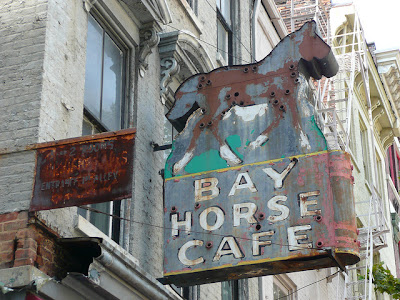 A new sign has been posted - Aronoff Center Deliveries
A follower of my facebook page had this possible reason for the potential demolition:


The semi's that come in for shows at the Aronoff usually have a lot of trouble getting to the loading area from Gano St. off Main St. and sometimes even hit this building. Would I be right that the Aronoff/Cincinnati Arts Association is behind the demolition which is basically just the widening of the road detracting from the pedestrian street that is Main St. to accommodate Broadway shows? And if this is the case, shouldn't this have been better planned by the engineer? The Aronoff has frontage on three streets and takes up half of the block, you think they could've sacrificed some square-footage to meet their loading needs.

The research I have posted has been sent to the Cincinnati Preservation Association so that it can be represented at the Historic Conservation Board meeting.

While we await the HCB's verdit, let's take a trip down memory lane and read some articles about the Bay Horse Cafe that our wonderful Public Library of Cincinnati and Hamilton County found and sent to me.

OLD BAY HORSE AWAKENS FROM 14-YEAR SLEEP; AGED PROPRIETOR AND EMPLOYES TO CELEBRATE
Cafe Is Just as It Was Before Prohibition Came.
HISTORIC SPOT
Owner Remains at His Post for Nearly 55 Years.
When Rip Van Winkle tottered back to his home after his 20-year sleep in the Catskills, even his old wife failed to penetrate the disguise afforded by his shaggy beard. It was another Rip than had wandered away a score of years before.
In Cincinnati there is a little cafe which has lain dormant during the 14 years of prohibition period. It was not asleep, exactly, but its proprietor and his employes passed from middle age into the 70-year class.
The glasses on the bar remain the same; the pictures on the wall are unchanged, but the voices of the waiters have grown shriller and the hand that turns the spigot to permit the flow of beer has less power.
But the Bay Horse Cafe, 216 East Fifth street, is flourishing now like the proverbial bay tree. The return of beer has put new life in the old steed, whose origin dates back to the days when the horse auctions were located in the neighborhood of Fifth and Sycamore streets.
For fifty-five years Gus Schmieg, 73, its proprietor, has worked within the four walls of this building. He is so happy over the present situation that despite his years he is planning as far ahead as October 31 for a celebration, which will be arranged in honor of his veteran employes.
OWNERSHIP DATE
“I am choosing the October date for a little celebration,” Schmieg said Monday, “because that is the date, 37 years ago that I became proprietor here. How well I remember it. It was the day of the ‘gold parade’ when the ‘gold’ Democrats and Republicans celebrated their victory over ‘free silver.’ They drank up quite a lot of beer.”
Schmieg started out as a storekeeper at the old Hotel Arlington, later the Hotel Dennison, Fifth and Main streets. William Brothers, bartender at the hotel, got the idea of a place of his own and opened the Bay Horse Cafe, across the street from the hotel. He took Schmieg with him.
“And for 55 years,” Schmieg said, “I have worked here in these walls.”
Old pictures given him and his predecessor and others, of the chase, of old stage favorites, of great sporting events, line the walls, just as they always did. The entire back of the old cafe is filled in by a huge picture, “Call to the Moose,” by Leon Lippert.
“cost me several hundred dollars, that one,” Schmieg says proudly.
LIST OF EMPLOYES
Among the employes that Schmieg proposes to fete are: Howard Cady, 69, who has been with Schmieg for ten years; Nick Borsche, in his fifties, who counts 13 years at the cafe; Sadie Barker, who has worked there 27 years; Albert Bramkamp and Tom Manley, present bartenders, who have served 10 and 13 years, respectively, at their present work.
“I never discharge anybody,” says Schmieg. “I’m careful when I hire and I don’t fire. Some leave, but they don’t get let out here. This thing of letting persons go because they are old is a big mistake. Age may slow up the worker a bit, but his faithfulness and other qualities make up for any little loss of vitality. My employes are like a happy family.”
During prohibition Schmieg ran his place for several years at a loss just to keep his employes in jobs.
The idea of the little celebration came to him, he said, at a dinner given to his sister, Mrs. Carrie Borsch, 80, to celebrate her birthday, Sunday, at a restaurant.
“First time she ever ate in a restaurant,” Schmieg said.
He and his sister live together at 3237 Harvest avenue and she is still active, keeping house for her brother. “We arise at 5 a.m. every morning, as always,” says Schmieg, “and she gets my breakfast ready.”
A salesman interrupted him to inquire what soap he would take for the cafe. “Same as always,” he said. Things do not change around here.

New Stable for Bay Horse
by Si Cornell
The Bay Horse will run around the corner and up the street to Joe Logan’s Grand Cafe at 625 Main.
It’s a joining of ancient saloons. (Joe Logan, 64, temporarily at least, is retiring.) The Bay Horse, probably the city’s oldest liquor dispensary, will run on License transfer papers are on their way to Columbus.
Nobody knows old the Bay Horse is. The late Gus Schmieg, who owned it from the 1890’s until his death in 1938, found Civil War papers in the basement.
Gus looked out the Bay Horse’s front window for 61 years, and named his saloon after a nag that escaped from the Fifth street horse auction when barrel booze was a nickel a shot. A bay horse actually ran into the place.
The Bay Horse has many distinctions. It held customers through at least three generations, and it probably put out the last nickel beer. It had moose heads and elder stateman, a fine chunk of wood for a bar and no spittoons because a trough of moving water flowed constantly.
But plans for the new Federal Bldg. said it had to go and the only question was where would be the new stable.
When the Bay Horse gallops to Main street, it will have a fitting home. The Grand Cafe’s back bar probably is close 100 years old and is washed, oiled and polished every day. The floor is hand-set tile in patterns that couldn’t be replaced for a fortune.
Joseph Michael Logan, proprietor, has been there since shortly after beer came back, and Jimmy Bright, son of the man Joe worked for then, now tends bar.
The Grand, like the Bay Horse, has its own traditions. Foremost, perhaps, is Joe Logan’s white shirt. It is the starchiest white shirt in town. Sometimes a fellow wonders how Joe turns his head without slitting his throat.
On the end stool is likely to be Stanley Schulte, the “Battling Schultz” of long ago, who answered the bell against the best. Next to him probably will be Tommy Murray, the nation’s champion jockey of the 1920s, who tells marvelous stories of sweat stained saddles when a whip across another jock’s face was worth 10 lengths. Tommy once fought and won a stretch duel with the great Earl Sande that way.
One difference between the two saloons. Bill Marck, who left his 110-passenger Florida yacht to come north and move his Bay Horse, accepted past practice of his predecessors and never served a woman. Courtly Joe Logan, and his wife, have served everyone. Will the new Bay Horse finally let a female pass the portals?
Both places are a bit of yesterday amid the hurly-burly of today. About the newest tune on the Grand’s juke box (mainly because Joe Logan’s Irish ancestry) is Bing Crosby singing “Galway Bay”, circa 1939.
Since most of the Bay Horse’s old-time customers – and there are a bunch with 50 years’ experience – now work or live a little farther uptown than they once did, the transition should cause scant problems. Both places once had customers who ate, drank beer, sang and played cards of an evening. Now, cards are verboten, and singing carries a 10 per cent entertainment tax.
Only thing Bay Horse habitues might have to learn is how to sip beer in the presence of women.

I love taking a walk through stories of the past. Let's hope the stories of 625 Main Street as Korf Jewelers and the Bay Horse Cafe get to live on in the building where they once resided.

Update - The Historic Conservation Board denied the demolition. Read the full description.
Posted by cincyhistoryluvr at 9:49 PM
Email ThisBlogThis!Share to TwitterShare to FacebookShare to Pinterest