Not Just the Bay Horse Cafe

2021 UPDATE - Since the original date of this blog post, the Bay Horse Cafe and Roadhouse is alive and well, sign and all!
I was made aware about today's blog post from a few statuses on Facebook. A permit has been filed for demolition of this building at 625 Main Street, is well known for its old sign:
More about the Bay Horse Cafe in a bit, because this building has a long history before the bar moved to this location.
In 1849, Henry Korf, a 24 year old immigrant from Germany, opened a watch shop at 62 Main Street. By 1853, Henry moved his shop to 369 Main Street. Business must have been good, because by 1865, he built this home on Hackberry Street in East Walnut Hills:
In 1873, Henry Korf moved to 277 Main (present day 625 Main). In 1886, the book "Leading Manufactures and Merchants of Cincinnati and Environs" had this to say about Mr. Korf:


Henry Korf, Watches, Clocks, and Jewelry, No. 277 Main Street.—Among the many professed watchmakers of the country there are few who have the experience and skill to make a perfect watch throughout, and when one is found who has made this important work the study of his life, it generally follows that his establishment is the place par excellence for those who desire first-class work. Mr. Henry Korf has for thirty-five years been engaged in business in the Queen City as a watchmaker and jeweler, and there is not in Cincinnati a more reliable expert or a more thorough master of his art than this veteran in his line of industry. Mr. Korfs experience in the practical work of a watchmaker covers a period of nearly half a century. He alters watches from slow to quick rate and adjusts them to the changes of heat and cold, guaranteeing his work to secure the nearest possible approach to absolute accuracy and warranting satisfaction as to workmanship and prices. He manufactures a marine chronometer which is more reliable than most instruments in use, and carries in stock a fine selection of the best watches, clocks, and jewelry of American and foreign manufacture. He is a German by birth, and is a genial gentleman and representative business man. - Source

Mr. Korf married shortly after arriving in Cincinnati to Mary and they had three children, all who lived to adulthood. Henry Jr was born in 1855 and joined his father's business along with his brother, George, born in 1860. Their sister, Mary, was born in 1857 and never married. She continued to live with her parents until their deaths.

Henry Korf, Sr died in 1912 at the age of 87. George also died in 1912, shortly before his father. Henry Jr was left to run the business and while he did marry Josephine Uphof, they never had any children. So he enlisted the help of his wife's family in the business.

In 1919, the Jewelers Circular Weekly wrote about the longevity of Henry Korf's business:

HENRY KORF founded the present retail jewelry business which bears his name in 1849 when stores of that character were scarce in Cincinnati. The business was built mainly at that time on the watch repair work of the city, which rapidly caused the business to expand. The original location was at 9th and Main St., but just 50 years ago he moved it to the location it now occupies, and has occupied since that day, at 625 Main St.
Mr. Korf did not live to celebrate the 50th anniversary of the business in the present store, but died several years ago. Two of his sons, Henry Korf, Jr., and George Korf, took hold of the business before his death. George Korf died in 1912. The present proprietor of the business went in with his father when he was 15 years old, and has been identified with that line for 49 years.
"Changes in the line carried during that time have been great," Mr. Korf declared. "Formerly every jewelry store carried a large line of optical goods, but today that line is handled almost exclusively by specialists. We handled a great deal of plated goods 50 years ago, but owing to the entrance of the department stores in that line, the retail jeweler has almost eliminated what was once one of his big stocks."

While the Korf family continued to own the building, in 1925 the business was moved to the Schmidt Building, believed to have stood on 5th Street. Henry Korf, Jr died in 1932 but I found a mention in "Chilton's Jewlers' Circular" in 1949 that John Tibbe, one time employee of the business was then its owner and quietly celebrate in 100th anniversary.

So what happened to 625 Main Street after 1925? The upper floors had been used as rental space since the building was built and by 1925, the space was being advertised as "Furnished Rooms for Rent". If you take a close look at the building, a very faded sign still hangs in advertisement.

The main retail space became a "lunch room" restaurant by 1930 run by Edward Sindlinger, William Bellew (1935) and Joseph Logan (1940).The building was owned by the Korf's until Henry's death and owership transferred to his nieces from his wife's family. They owned it until 1954.

The original Bay Horse had been a located at present day 216 E 5th Street, what is now the Federal Building. The Bay Horse dates back to 1878 when William Brothers opened his saloon at this address and first called it the Bay Horse Exchange in 1879. In 1900, the Bay Horse Exchange was run by Gus Schmieg and Edward Schott. According to the book Cincinnati: A Guide to the Queen City and its Neighbors, before World World I and Prohibition, Cincinnati was know as the "wettest" city between New York and Chicago. On 5th Street alone, just between Main and Sycamore Streets, there were more than 20 saloons and restaurants. There was also a horse market just across the street, which is how the Bay Horse got its name. The Bay Horse was also known for the bartender shaking a gin fizz for 30 minutes.

Gus Schmieg attempted to continue the business during Prohibition by selling soft drinks, and in 1933 when alcohol once once again legal, Mr. Schmieg reopened the Bay Horse. He died in 1938 and Bill Marck took over the business. In 1962, construction of the Federal Building forced the Bay Horse Cafe to move to 625 Main Street. 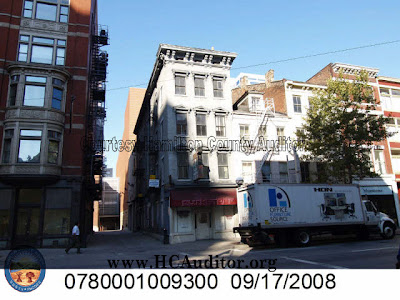 The Bay Horse became to be known as a neighborhood trouble spot. In 2005 it was closed after it was found that it was operating without a liquor license and also after a shooting occurred during the day right outside its door. After the its closing, Quikstaff operated an employment firm for a short time but it appears the building has been vacant for some time. It had been for sale but now the owner has applied for a demolition permit that has to be reviewed by the Historic Conservation Board.
More information on the Bay Horse on the next blog post!
Posted by cincyhistoryluvr at 1:25 PM
Email ThisBlogThis!Share to TwitterShare to FacebookShare to Pinterest